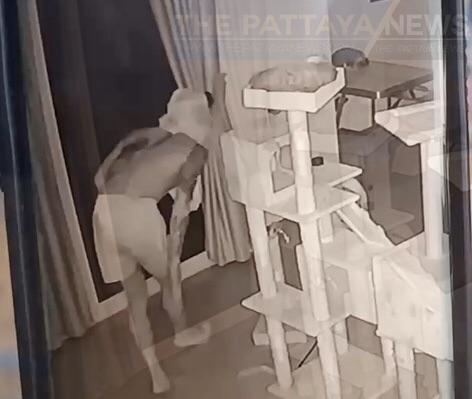 Pattaya –
Police are hunting for a thief who broke into a dog and cat café in Pattaya.

See the video below:

The owner of the 7 day dog and cat café, Mr. Tanakorn Prasongarsa, 31 told The Pattaya News he was sleeping on the third floor of the shop on Thursday in the early morning.

The thief climbed the wall near the building before breaking into the second and third floor. He had stolen about 10,000 baht cash. As seen on video, he seemed aware of the many animals and people sleeping and attempted to move very quietly.

He reported the incident to The Pattaya City Police and The Pattaya News. He believes that it is the same thief who broke into many rooms at a luxury condominium nearby. The thief is still on the run although Pattaya Police are working various leads to find the suspect.