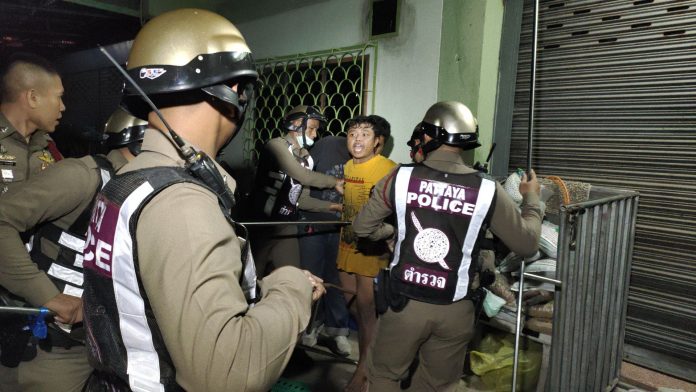 Pattaya –
A Thai man has been arrested this morning in Pattaya after breaking into an Aluminum shop in Pattaya.

Captain Janerob Wangthongsang of The Pattaya City Police was notified of the incident at 3:00AM near an aluminum shop on Sukhumwit Road in Pattaya.

Police and The Pattaya News arrived at the scene to find the man who had lost control of himself and appeared to be in a manic state. He was destroying everything around him. Police managed to arrest him after taking multiple precautions as the man was not cooperative.

The owner of the shop told Pattaya police that he heard loud noises coming from his shop as he lives next door. So he reviewed his CCTV from within the store and discovered the intruder damaging products and property.

The suspect had no identification and due to his mental state was unable to tell police who he was. He was arrested and will be taken to a local hospital for a medical and mental evaluation.

Pattaya Police are continuing their investigation for further potential charges.