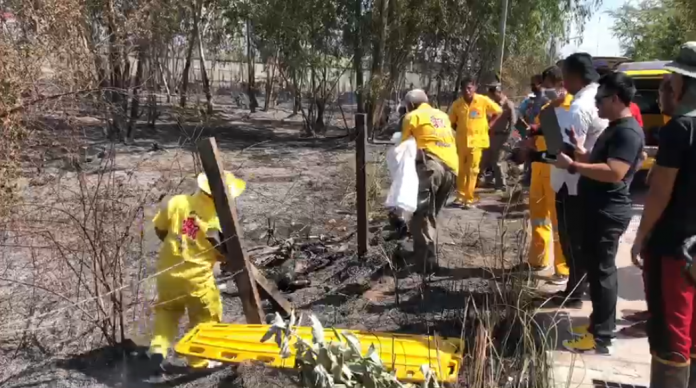 Sri Racha –
An unidentified woman’s body was found burnt to death along with a motorbike in a ditch near a vacant field this morning in Sri Racha.

Captain Issaraphong Suwannajak of the Nongkham Police was notified of the incident at 11:10AM today in Soi Nong Klang Dong 47 on Motorway 7 in Bueang sub-district.

In the ditch the first responders found the burnt motorbike and the heavily burned woman’s body. She was so heavily burned that an identification was going to be difficult and possibly depend on dental records, police told the press.

A nearby witness told police that he heard the loud noise of a motorbike engine revving before flames covered the area. He was some distance away and approached the fire and called police and the fire department. The body was found after the body was put out. He did not witness the start of the incident or if other people were involved.

Sri Racha Police are continuing their investigation to identify the body and the cause of the incident.