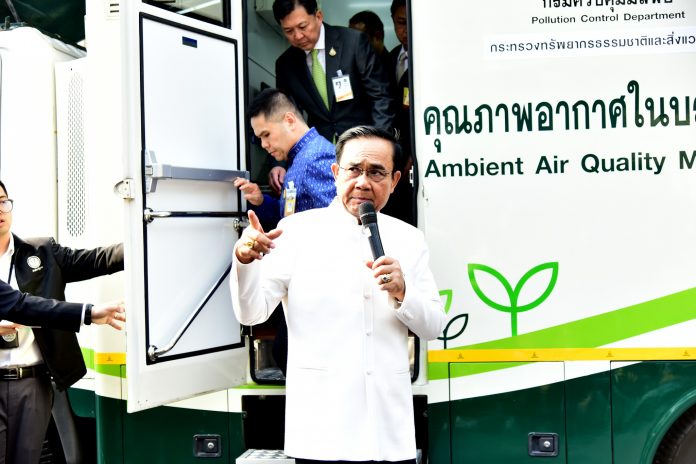 BANGKOK (NNT) – The government will be enforcing 12 measures addressing the air pollution crisis. The Prime Minister said the government has not been negligent over the issue, however the solution to this problem must be done step-by-step and receive cooperation from all sectors.

Prime Minister Gen Prayut Chan-o-cha has revealed the government’s plans to address air pollution will cover short-term actions and long-term solutions, tailored to the conditions in each area. These measures will be enforced based on the severity of air pollution at the time, starting with general measures for when PM 2.5 airborne dust is measured below 50 micrograms per cubic meter.

The Cabinet, in its mobile meeting, has agreed in principle to 12 air pollution reduction measures. These will be further discussed in a meeting chaired by Deputy Prime Minister Gen Prawit Wongsuwan. The 12 measures consist of

1. The extension of lorry-free zones in Bangkok, from Ratchadaphisek ring road to the outer Kanchanapisek ring road.

2. The ban on all lorries from entering central Bangkok on odd-numbered days in January and February this year.

3. Exhaust checks on all non-scheduled passenger vehicles, by increasing inspection units to 50, serving 50 districts of Bangkok.

4. Exhaust checks on all passenger and cargo vehicles to prohibit those emitting excessive pollution.

5. The inspection of factories and the issuance of maintenance orders or prohibitions at factories emitting excessive pollution.

6. Regulation of metro line construction sites, as well as other projects, to ensure compliance with pollution control regulations and proper traffic management.

7. The ban on outdoor burning in Bangkok and neighbouring provinces, as well as penalties for violators.

8. The authorization of provincial offices and local administration to regulate outdoor burning, vehicles, factories and construction sites during the polluted period.

10. Campaigns discouraging the use of private vehicles, and mandatory black smoke inspection for all vehicles owned by government employees.