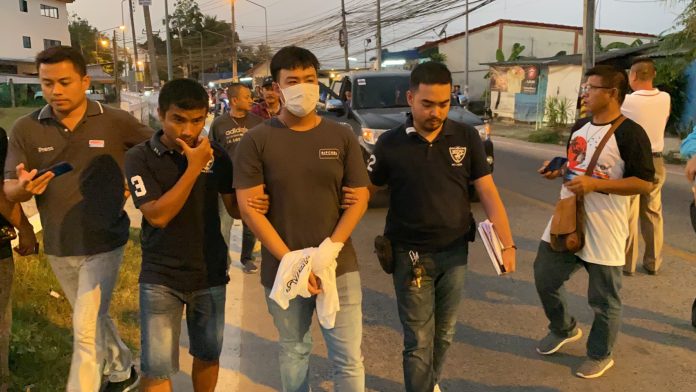 Pattaya –
A gun man has been arrested after shooting nine times at a moving vehicle and a driver in Pattaya, causing the vehicle to crash at high speed.

A thirty year old man survived a presumed attempt on his life yesterday morning in Pattaya after his vehicle was shot at nine times, causing it to crash into a power pole.

Yesterday, at 6:00PM the suspect, 30 year old Mr. Anuphong Suetrong surrendered himself to the Nongprue Police.

Anuphong told police that he and Mr Waranyoo had argued about a woman over Facebook. The argument spilled into comments, since deleted and in public view on Thai social media groups.

Yesterday morning he tracked down Mr. Waranyoo after the comments made online angered him and followed him before opening fire, shooting the vehicle nine times and causing it to crash.

Anuphong has been charged with attempted homicide, illegal possession of firearms and ammunition, opening fire with a weapon in public and carrying a gun in public without permit. He remains in police custody.