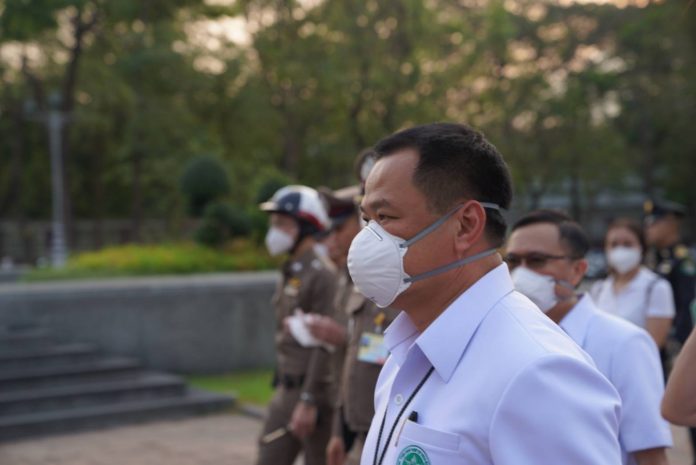 BANGKOK (NNT) – Deputy Prime Minister and Public Health Minister, Anutin Charnvirakul, today led a group of public health officials to Lumpini Park in Bangkok to distribute PM2.5 filtering masks to members of the public. Mr. Anutin said the government is taking all necessary steps to deal with outdoor burning as well as industrial and vehicle emissions.

At the King Rama VI Monument in Lumpini Park yesterday (Jan 22), Mr. Anutin together with the public health officials took part in a campaign to build awareness of PM2.5 dust particles and self-protection against air pollution. They distributed protective masks to municipal officials, police officers and street sweepers in Lumpini Park and Wattana and Pathum Wan districts, as their jobs require them to work outdoors.

The Deputy Prime Minister said the government can’t solve this issue alone. It needs cooperation from all sides to reduce activities that create air pollution and implement protective measures. A meeting of the cabinet ministers yesterday considered a proposal for people to work from home and students to study online to reduce vehicle emissions, improve the health of state employees and save utility costs and other expenses affecting private firms.

Mr. Anutin encouraged the general public to look after themselves. If they have to exercise, they should avoid outdoor exercises. According to a Chinese study, people can work out by simply swinging their arms.

Another PM2.5 reduction measure is to change the working hours of civil servants at the Bangkok City Hall and Thani Noppharat Building to between 10 a.m. and 6 p.m. Their previous working hours were from 8:30 a.m. to 4:30 p.m. This will help ease traffic congestion during rush hours between 6 a.m. and 9 a.m. and between 4 p.m. and 7 p.m. The measure will be lifted until the air quality improves. The Bangkok Metropolitan Administration (BMA) has encouraged other agencies to adjust their working hours during this period.