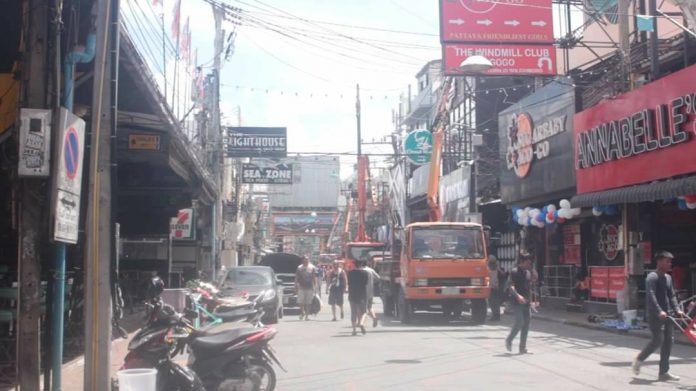 Business owners are bracing for the Walking Street section of ongoing Pattaya construction projects which is expected to temporarily cause disruptions to the world famous street over the next several months.

The construction project, which will be to install larger drainage pipes to alleviate seasonal flooding and to remove the overhead power and various telecommunication cables and move them underground is set to begin in earnest imminently.

Naris Petcharat, the head of the Walking Street Business Operators Association, told The Pattaya News that the work was originally set with the remainder of the South Pattaya portion of Beach Road during November but city hall officials made the decision to postpone the Walking Street portion until now.

The work is expected to be completed in three months.

Naris told The Pattaya News that business operators would be affected and portions of the street would be under construction but the owners were steeling themselves against potential short term disruptions knowing that in the long term the work is needed.