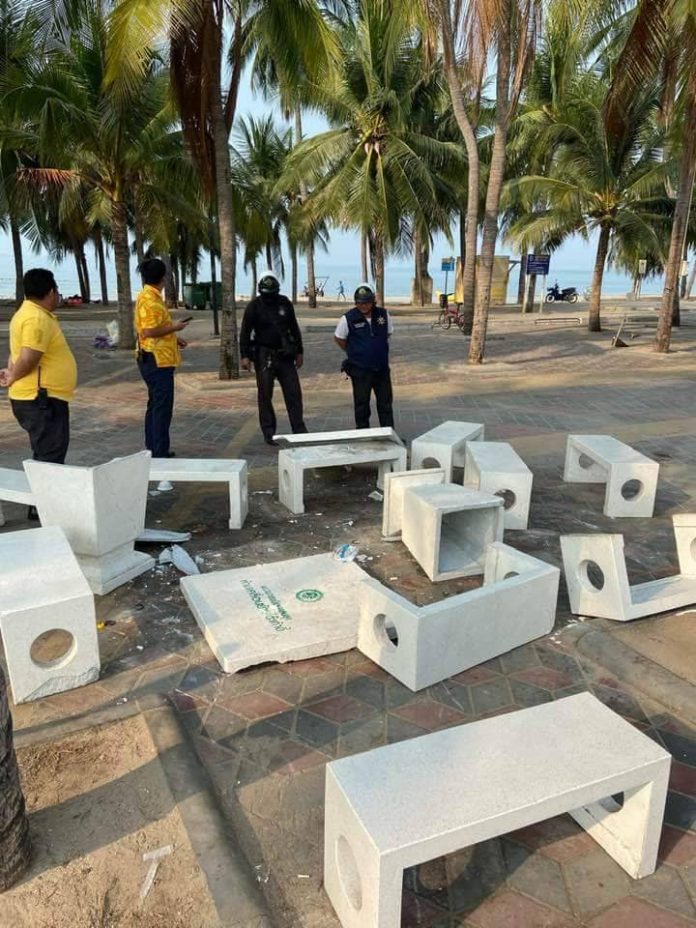 Bangsaen Police are investigating after brand new tables and chairs on Bangsaen beach were smashed and damaged early this morning.

Bangsaen –
Police are investigating after new tables and chairs on Bangsaen beach were heavily damaged early this morning.

Sane Suk Mayor, Narongchai Khunpluem has posted photos on his Facebook today which shows damaged new tables and chairs on the beach. They had just recently been purchased and setup on the beach.

He also noted that CCTV cameras nearby had been in the process of being setup but were not ready yet. There is regrettably no footage about the incident.

44 year old Ms. Patchamon Saekuay who is a food vendor at Bangsaen Beach and a witness told The Pattaya News she saw in the early morning foreign tourists were sitting there and drinking heavily. She did not know where the tourists were from.

She is not sure if they had a physical altercation, she told officers. Nearby, Police found many broken alcohol bottles and signs of a potential fight. Other witnesses have allegedly come forward also stating a group of intoxicated foreign tourists were responsible.

The mayor and local police continue to interview witnesses and seek more information about the incident with the Mayor stating the offenders will be caught and punished to the fullest extent of Thai law for disrespecting the country.

Written by The Pattaya News team.