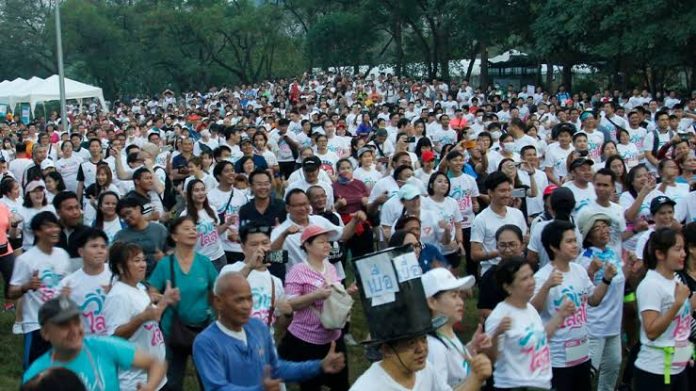 BANGKOK (AP) — Thousands of anti-government protesters took part in the “Run Against Dictatorship” in the Thai capital Sunday in the biggest political demonstration in years.

Organizers said more than 13,000 people turned up for the run at a park, demanding that Prime Minister Prayuth Chan-ocha step down. Others cheered them on, giving a three-fingered salute that has been the pro-democracy movement’s symbol of resistance.

T-shirts were emblazoned with caricatures of Prayuth, and placards on a stage carried tongue-in-cheek slogans, such as “Every drop of sweat is for the future of Thailand” and “Getting rid of Uncle is harder than getting rid of belly fat.” Prayuth’s nickname is ’Uncle Tu.”

A smaller counter protest by government supporters was held at another city park more than 10 kilometers (6 miles) away, signaling rising political tensions.

Last year’s general election was meant to restore full democracy, five years after the military under Prayuth staged a coup and took power. Critics say the election only established a veneer of democracy.

The government’s sluggish economic performance has added to a growing sense of discontent.

The trigger for Sunday’s rally were moves by courts to dissolve a popular, new progressive political party.

The Future Forward Party came from nowhere to become the third largest group in parliament with 80 seats. Their anti-military agenda made many younger Thais flock to their banner in a challenge to the deeply conservative ruling elite.

The party’s rise in popularity has been met with legal cases, through the Election Commission and the Constitutional Court, for a number of alleged breaches of the law. Many now assume the party will be found guilty and dissolved, possibly even this month.

The party’s charismatic leader, Thanathorn Juangroongruangkit, has become a galvanizing figure behind the growing protests.

“The people show great awareness of the political situation,” the billionaire businessman-turned-politician said at the rally, in between posing for selfies with excited supporters.

“I believe that in order for Thailand to be able to be a democratic country again, the first step is that General Prayuth has to get out, and the people here today I think share that feeling. This is the demonstration of the anger of the people,” he said.

Similar runs were organized in other provinces Sunday, leaving many to wonder whether Thailand is heading for another prolonged bout of street politics. Rival camps have occupied parts of Bangkok, and sometimes fought running battles, several times over the last 14 years.