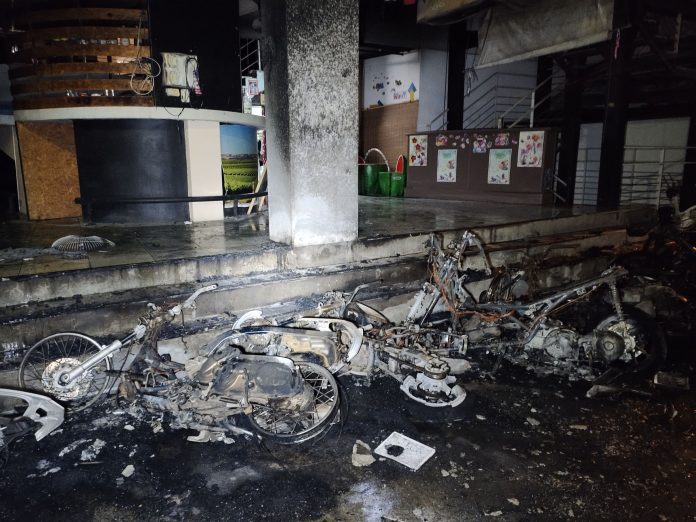 The video can be found here: https://youtu.be/as0gL6Oa2EM

A fire has damaged nine parked motorbikes and a portion of a beer bar in Soi Buakhao early this morning.

Sub-Lieutenant Thongin Panyanam of the Pattaya Police was notified of the fire at a beer bar near R-con Blue Ocean Hotel at 5:30 AM this morning, January 2, 2020.

Fire fighters and The Pattaya News reporters arrived at the scene to find that multiple motorbikes were enveloped in a blazing fire that was starting to spread to a nearby beer bar and building.

Due to the quick work of Pattaya firefighters the fire was quickly placed under control. Nine motorbikes were damaged in total, the majority nearly a complete loss.

Witnesses at the scene who called the fire department  told The Pattaya News that they smelled something burning before hearing the sound of a large explosion. The explosion caused the row of motorbikes to light on fire. Firefighters are reviewing the scene this morning as it is not clear exactly what caused the blaze.

Meanwhile, Pattaya police are working on finding the owners of the damaged motorbikes as well as assisting with the investigation.