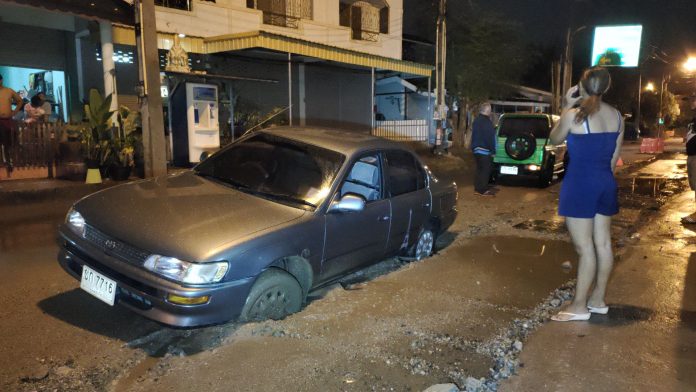 A surprise off season rain storm caused havoc in Pattaya last evening throughout the city, especially in terms of many construction areas that are in the process of being paved.

Local residents in Pattaya complained to The Pattaya News last evening regarding road construction that has no warning signs which caused several vehicles to be damaged. Footage we posted to our social media channels appears to show motorbikes and cars that had fallen into unmarked construction pits throughout the city.

Locals said road construction for water drainage on Boon Kanjanaram Road 4 was a major problem last evening during the storm. No warning signs or lights were set to warn road users, according to witness Suparat Hiranpanit.

32 year old Ms. Suparat Hiranpanit told The Pattaya News that her German friend who was driving a personal car had fallen into a hole at one construction site. Luckily there were no injuries.

This comes as Pattaya City rushes to clear most construction temporarily for the New Year’s week to allow traffic to flow through the city more naturally during the busiest week of the year. The Pattaya City Mayor has ordered a one week stop on the construction projects for that week. The various projects are set to continue until next Summer and entail water drainage and electrical cable infrastructure work.