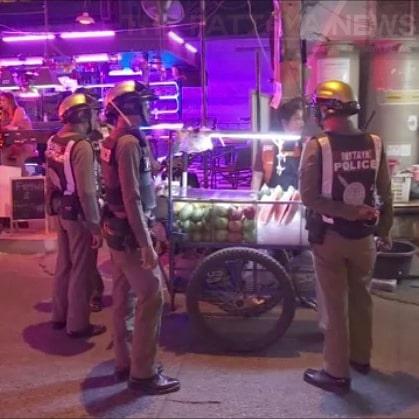 Pattaya –
Three Vietnamese Nationals have sustained serious injuries and one man has fled after they got into a public knife fight in Pattaya late last evening on the street behind the Made in Thailand Beer Bar complex area near Soi Buakhao.

Lieutenant Anan Mahakitassawakun of the Pattaya City Police was notified of the incident at 11:30PM in Soi Buakhao.

Police, emergency responders and The Pattaya News rushed to the scene to find three injured men from various slash and stab wounds.

A fourth man was also involved police stated, also Vietnamese, who was selling fruit. He had already sped away before police arrived leaving his abandoned cart in the middle of the road.

Witnesses told The Pattaya News that the men were arguing before they started attacking each other with knives….directly in front of dozens of beer bars full of tourists and staff! The scene caused panicked tourists and bystanders to scramble to get away from the public brawl.

The Pattaya News noted that the four men were working a forbidden occupation for migrants as street sellers.

Pattaya Police are continuing their investigation and stated multiple charges will be taking place for the incident. They will also be pressing charges for working a reserved job for Thai people and not having a work permit. The police also stated they are concerned that the incident happened in front of tourists and can ruin the image of Pattaya.

Written and photos by The Pattaya News Staff and affiliates