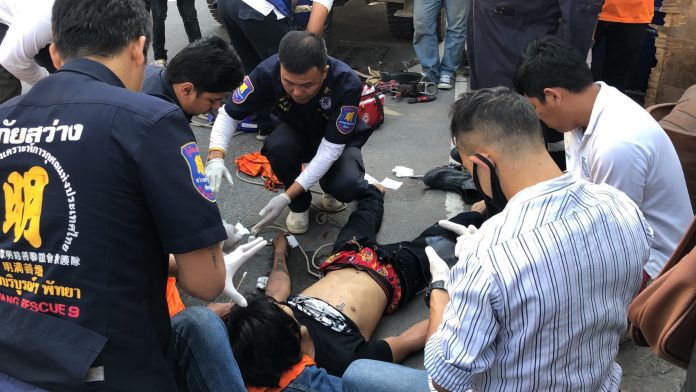 Pattaya –
A Cambodian man has sustained serious injuries from electric shock while working on a pole in Pattaya today.

Rescue workers were notified of the incident at 2:40PM near Soi Korpai on Thep Prasit Road.

Rescue workers and The Pattaya News rushed to the scene to find the injured party who was later identified as 25 year old Mr. Nop, Cambodian national. He had suffered multiple burns and was unconscious. He legally worked for the electric company. He was rushed to a local hospital.

His Co worker, who didn’t want to give his name, told The Pattaya News that Mr. Nop was wearing safety equipment and was near the top of the pole when the incident occurred. Due to wearing the proper equipment and being secured he didn’t fall down to the ground.

The incident is under investigation for the exact cause by electric company officials.