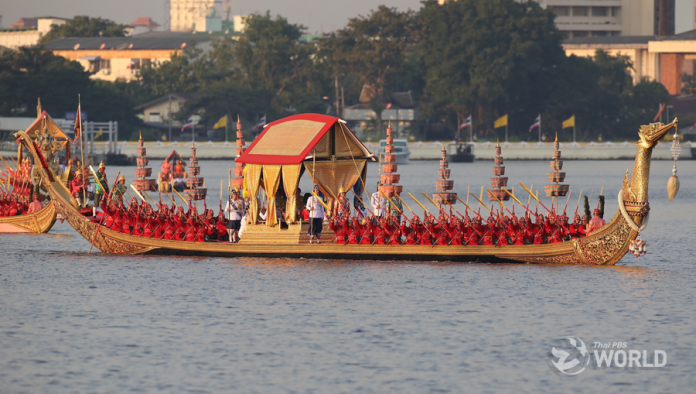 The glory of the Thai Monarchy was in full display today when Their Majesties the King and Queen travelled along the Chao Phya River in a spectacular flotilla of ceremonial barges and boats to the shouts of “Long Live Their Majesties” from tens of thousands of people who lined up along both banks of the river to witness the historical event.

Their Majesties, dressed in magnificent traditional royal costumes, embarked on the royal barge Suphannahong at Wasukri Pier in Dusit District to travel a distance of 3.4 kilometres in a majestic procession that consisted of 52 ceremonial barges.

As the procession proceeded under a clear blue sky, Buddhist chanting was  held at six temples along both sides of the river in their Majesties’ honor.  Ceremonial songs for barge-rowing also echoed throughout the route of the procession.

People, most dressed in yellow,  began filling up the banks of Chao Phya River since morning to have a glimpse of their once-in-a-lifetime event.    They shouted “Long Live Their Majesties” as the procession passed by.

More than 2,200 oarsmen provided by the Royal Thai Navy, and all dressed in colourful ancient ceremonial military uniforms, took part in the procession which was also broadcast live.

The trip took about 45 minutes, after which Their Majesties disembarked at Ratchaworadit Pier.   The royal barge procession, a tradition dating back to the Sukhothai era, was held to mark the conclusion to the Royal Coronation of His Majesty the King who ascended to the throne in May this year.