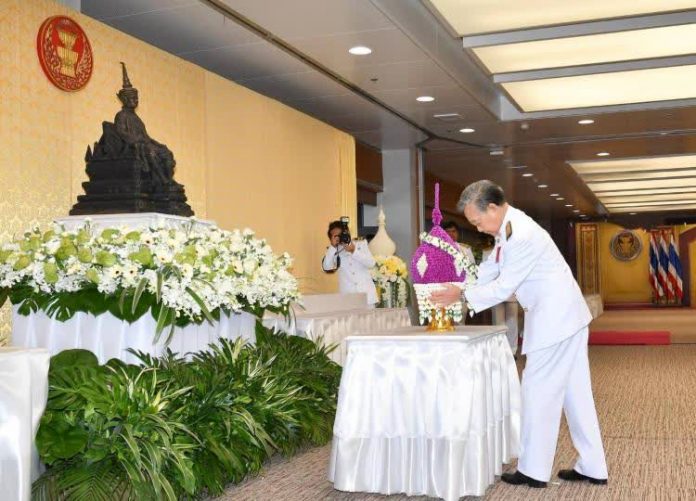 BANGKOK (NNT) – On the occasion of Constitution Day in Thailand, which falls on December 10 each year, civil servants and members of political parties are paying homage to His Majesty King Prajadhipok (Rama VII), who granted the first permanent charter to the Thai people on this day in 1932.

The Speaker of the House of Representatives, Chuan Leekpai, together with members of parliament (MPs) and the President of the Senate, Prof. Pornpetch Wichitcholchai, laid wreaths and paid homage before the statue of His Majesty King Prajadhipok at the Parliament Building in Bangkok’s Kiak Kai area to mark Constitution Day.

Representatives of government agencies, educational institutions and political parties also laid wreaths on this day. Among political figures were the Deputy Prime Minister and Commerce Minister, Jurin Laksanawisit, and members of the Pheu Thai, Chartthaipattana and Future Forward parties.

Constitution Day falls on December 10 each year to commemorate His Majesty King Prajadhipok (Rama VII), who granted the first permanent charter to the Thai people. The country’s system of government changed from an absolute monarchy to a constitutional monarchy on June 24, 1932.

The current constitution is the 20th charter of Thailand. It was drafted by the Constitution Drafting Committee (CDC), following a military coup on May 22, 2014. Several political parties have put forward proposals on constitutional amendments.