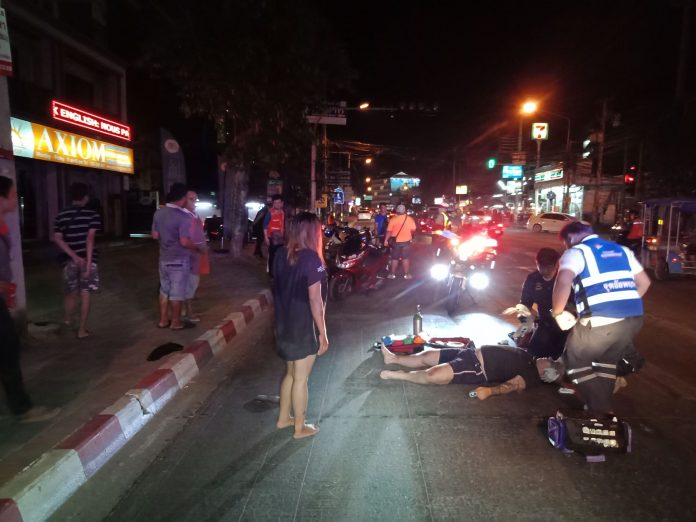 Pattaya –
A Danish man has sustained serious injuries after a motorbike he was riding on as a passenger driven by his intoxicated girlfriend slammed into a motorbike with a sidecar waiting at a red light in Pattaya early this morning.

The Pattaya City Police was notified of the accident at 1:30AM on Sai 3 Road in Pattaya.

Police, emergency responders and The Pattaya News rushed to the scene. The Danish man, who was the motorbike passenger, had sustained serious injuries and was lying on the road unable to move. He was rushed to a local hospital.

The heavily intoxicated motorbike driver, 34 year old Ms. Kanokphon Kritensen, who told the media she is the Danish man’s girlfriend was crying nearby. She was not injured in the accident. She allegedly admitted to being heavily intoxicated.

A damaged motorbike with a sidecar was also found on the road. The driver, 32 year old Wittaya Deelertram, was waiting at the scene. He was also not injured.

The motorbike sidecar driver told The Pattaya News that he had stopped at an intersection at a red light. The motorbike driven by Ms. Kritensen allegedly ran into him at high speed and did not slow for the red light.