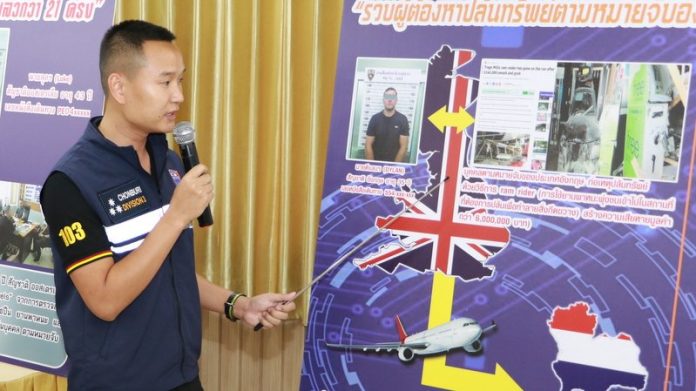 Taylor was wanted on an arrest warrant in England after he failed to present himself in court to hear sentencing for ram raiding a shop in Devon, southwest England, in the hope of robbing an ATM.

Taylor was sentenced last year to seven-and-a-half years in jail after crashing a Mitsubishi Shogun into a Trago Mills store at a shopping complex in the town of Newton Abbot and trying to steal an ATM machine.

Taylor, of Torquay, was part of a gang which used the car to crash through the front door of the shop in the early hours of the morning. Taylor had bought the car the previous day for £895 (B34,700).

Once inside the store Taylor and the gang attached a rope to the free standing machine and tried to pull it from its base. They failed and left empty handed. Blood and DNA on the machine matched Taylor’s, reported Devon Online.

But Taylor, 33, failed to show up to hear the verdict against him at Exeter Crown Court and was sentenced in his absence.

It was said he had told friends he needed time to “sort himself out”. The prosecutor said he may have fled to Thailand. (see Devon Online report here.)

Mr. Taylor had several previous convictions for the same type of crime and had just served four years in jail according to the UK press. He had only been released for two weeks when he committed this most recent crime.

Taylor’s arrest came after British authorities had informed Immigration officers that a suspect wanted for ram raiding was staying in Chon Buri.

Taylor’s permit to stay in Thailand had been revoked and he will be handed over to British authorities to face charges in England, the press conference in Bangkok yesterday was told.