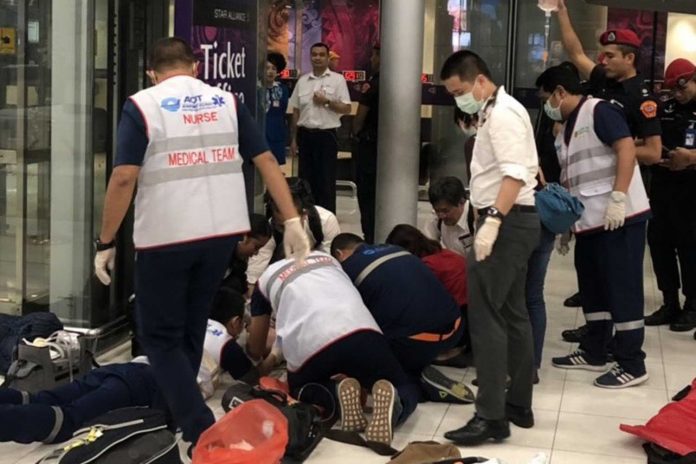 A Finnish man has died after he fell from the sixth floor of the passenger terminal at Suvarnabhumi airport on Friday night.

The tourist was found lying face-up with broken legs and multiple fractures on the fourth floor in the outbound passenger Zone F in front of a Thai Airways International ticket booth when tourist police arrived after being alerted at around 9:30pm.

The man, whose name was withheld pending notification of relatives, was still breathing when medical staff gave him first aid. He was rushed to Samitivej Srinakharin Hospital before he was pronounced dead shortly afterward.

Police said the Finnish national had entered the country on Sept 8 with a 30-day visa before extending his stay until Nov 6. Before the fatal fall, the man was seen using a mobile phone in front of a ticket booth on the sixth floor. He reportedly jumped from the sixth floor and landed to the fourth floor according to witnesses at the scene.

Investigators have informed the Finnish embassy about the incident. They are looking into the reasons why the man may have jumped.

This is far from the first incident of a tourist leaping to their death at the airport rather then return to their country. Last year the airport installed additional plastic barriers on airport bridges that connect to the parking garages to avoid people leaping from them after several tourists did so.