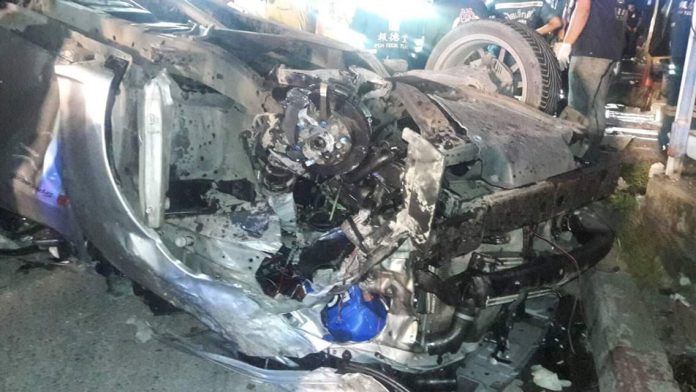 Road safety advocates are calling on authorities to enforce road safety regulations more strictly after 13 people were killed instantly and several more died in a local hospital when the pickup truck they were riding on overturned Sunday morning.

Nikorn Chamnong, a member of the House of Representatives’ transport committee and a road safety advocate, said officials should not hesitate to enforce road rules when they spot risky road user behaviour. “Officers must pay extra attention,” he said.

“If they see more than six people on the tray of a pickup truck that is exceeding the speed limit, they should stop the vehicle right away.”

A taxi driver who witnessed the accident told police that shortly before 1am, he saw a pickup truck turn from Soi King Kaew 2 onto the main King Kaew Road at high speed.

“As it prepared to switch to the right lane to go towards Lat Krabang, the pickup suddenly skidded off the road onto the pavement on the left, ramming two roadside power poles before overturning,” said the driver.

Twelve students who were riding on the rear of the pickup truck were thrown onto the road by the impact and were killed instantly.

Five other passengers sitting inside the vehicle were seriously injured, along with the driver. One died at the hospital later. Editors Note: There have been mixed reports on the injured in the hospital. Some Thai media sources say only the driver survived, others state three to four survivors. The driver, a 27 year old Thai male, did indeed survive the crash with moderate injuries and is recovering.

Mr Nikorn said existing laws actually prohibit passengers from riding at the back of pickup trucks. “However, due to the lack of efficient public transportation networks, many officers often hesitate to enforce the law,” he said.

As such, Mr Nikorn urged officers to follow the “middle path” when enforcing the law. For example, Mr Nikorn said that a maximum of six people should be allowed to sit on the tray, as having too many passengers at the rear will affect the truck’s centre of gravity and handling.

“They must not sit on the edge and the driver must limit the truck’s speed to 80 kilometres per hour on highways and lower in residential areas,” he said.

The National Council for Peace and Order had tried in 2016 to ban people from riding on the back of pickup trucks, especially during long holidays such as New Years’ Day and Songkran, but the ban was then revised to allow a maximum of six passengers to ride on the tray of the truck, following a widespread backlash.

Deputy police spokesman Kissana Phathanacha­roen told the Bangkok Post  police officers were often accused of preying on travellers whenever they tried to enforce the law.

A police investigation revealed that most of the 17 victims were students of Si Sa Ket Technical College and many were about to graduate.

They had been returning home from dinner and a concert.