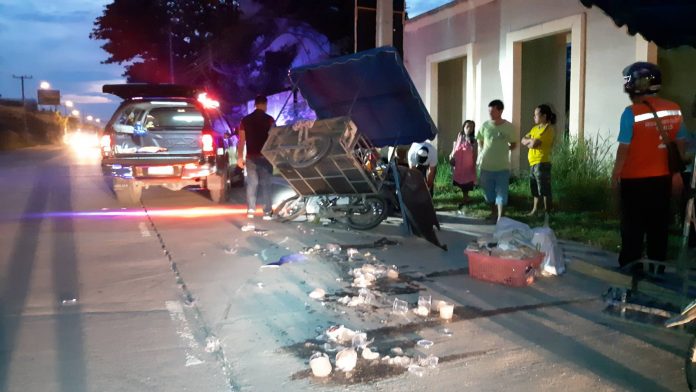 Bang Lamung –
One person has sustained injuries after a car driver fell asleep at the wheel and slammed into a motorbike sidecar in Hua Yai this morning.

Hua Yai Police were notified of the accident at 6:00AM on Chaiyapruek Road. Police and emergency responders rushed to the scene.

At the scene they found a damaged motorbike sidecar. Nearby, they found a 29 year old woman identified as Sopa Wongpan who had sustained injuries on the road. She was taken to a local hospital.

A damaged sedan was found on the side of the road. The driver, 30 year old Patinya, was waiting for police at the scene. He was not injured and his last name was not given to the press.

The driver admitted he fell asleep at the wheel. The vehicle slid to the opposite lane and then collided with the motorbike sidecar.

Police are continuing their investigation for further legal action.