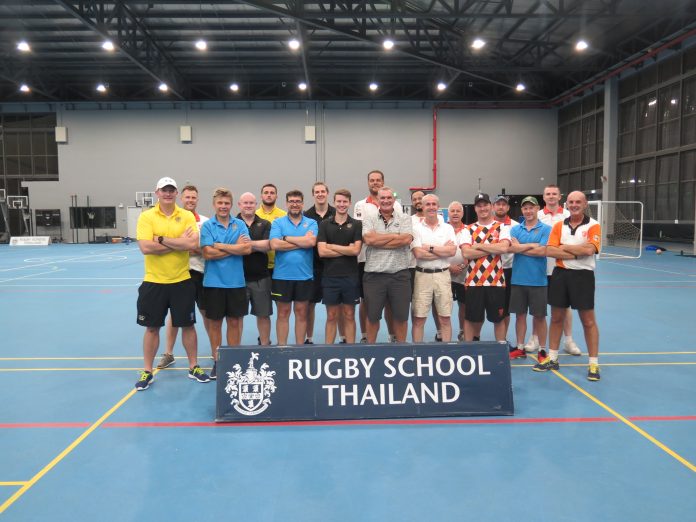 The game was not played in the normal netted enclosure, but half of the sports hall.  This gave the 8 men teams plenty of opportunities to score. Batting was conducted in pairs for 3 overs and bowling limited to 12 overs per team with a maximum of 3 overs per bowler.  Normal indoor rules applied.

John Harvey and Jainish Parikah from PCC made a good start by scoring 24 runs for the loss of one wicket, taken by the wicket keeper.  Momentum was maintained by Luke Stokes and Matt Harkness who added 37 for no loss (16 and 21 respectively). Colin Clark and Wesley Masterton took the next 3 overs and scored 33 (15 and 18 respectively) but lost 2 wickets – a run out and sharply taken stumping.  Richard Holt and Bernard Lamprecht faced the final 3 overs. John’s very slow bowling proved difficult to counter and he took both wickets for only 2 extras. Lewis and Chris bowled the last 2 overs with sizzling pace, each taking a wicket and conceding 15 runs. PCC concluded their innings with a score of 82.

RST began their innings on a high, in part due to poor bowling by PCC.  38 off the first 3 overs from Peter and Chris was followed by 33 off from Chris (different Chris) and Matt for the loss of 2 wickets taken by Wesley Masterton. PCC kept it tight by restricting Lewis and Guthrie to 20 runs for 2 wickets taken by Wesley and John Harvey. The final 3 overs were even tighter with only 15 runs conceded for 1 wicket but it was enough for RST to win by 7 runs.