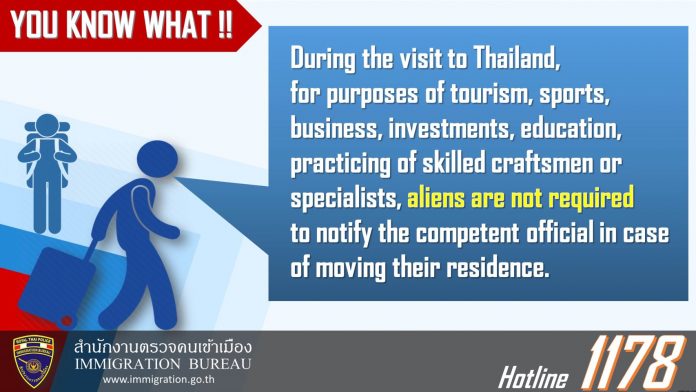 Yesterday evening an image began to go viral, which was confirmed to be official this afternoon, in which Immigration announced on their website that most foreigners do not need to notify immigration when traveling around the country over 24 hours.

As has been extensively reported in the news media, including our own web site, the confusion began in March when Immigration began to enforce a law from 1979 stating that a foreigner must notify when leaving their residence over 24 hours and that a landlord must notify that a foreigner is staying at their place of residence.  These two forms are TM28 and TM30.

It would appear that the announcement, which was brief, specifically refers to the TM28 portion, of the foreigner needing to report. It also seems unclear if it is tourists and business and education VISA holders and not retirement or marriage/family VISA holders.

It also makes no mention of if a landlord or owner of the property will still need to file a TM30 that a foreigner is staying at their address within 24 hours.

The announcement appears to be a response to major groups of Foreign business owners showing great concern over the rules that would cause issues to traveling foreign businesspeople in the past few weeks. The head of Thai Immigration held an interview with BBC Thai late last week in which he stated that the rules needed to change and were outdated.

Clarification is being sought from Immigration by multiple major news agencies.