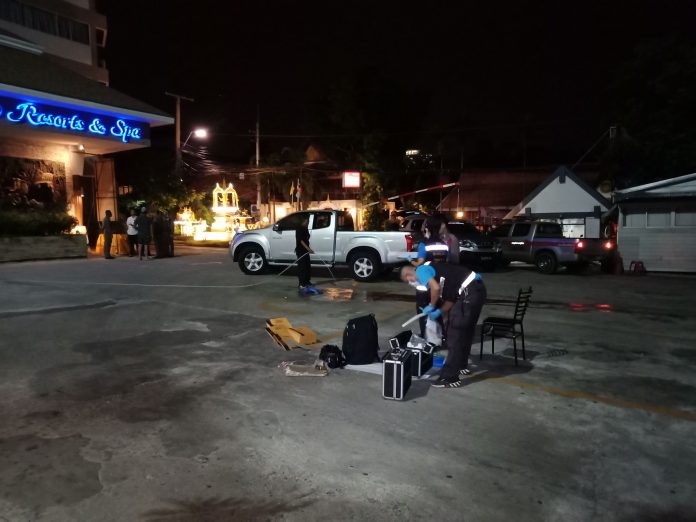 A patrol police officer who allegedly shot a hotel chef to death early this morning told The Pattaya News it was in self- defense.

Lt Aris Puangsai of the Pattaya City Police was notified of an incident at 2AM at a hotel in Soi Wong Amart, Naklua.

Police and emergency responders arrived at the parking area in front of the hotel to find the body of 35-year-old Prajakchai Siriwet who was a hotel chef at the resort.

Bullet wounds were found on his head. A knife, a pointed sharp bar and two spent bullet cartridges were found nearby.

Mr Prajakchai’s elder brother told the Pattaya News that hotel staff told him that his brother went to the hotel office to ask for his salary. He had brought the pointed sharp iron weapon with him. There was allegedly a dispute over his salary and the situation quickly escalated.

Staffers called police to the scene as Mr. Prajakchai would not calm down, they told the Pattaya News. Patrol police asked Mr Prajakchai to lower his weapon and, at first, he did.

Suddenly, according to police, he rushed the officers. The police Sergeant Major named only ‘Sam’ at this time to the press shot Mr Prajakchai twice, resulting in his death. Police have claimed that it was self-defense.