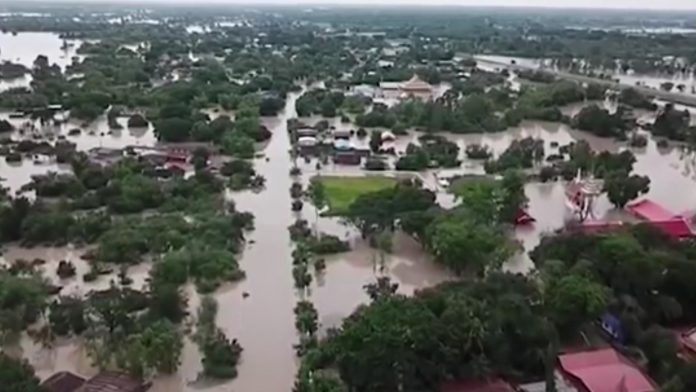 The combination of tropical storm Podul in upper Thailand, and the seasonal southwest monsoon in the South, have caused floods in 31 provinces resulting in 16 reported deaths and 102,074 households affected between August 29 and Thursday (September 5), Disaster Prevention and Mitigation Department chief Chayaphol Thitisak says.

The sixteen deaths were reported across Amnat Charoen (4), Roi Et (4), Khon Kaen (3), Phichit (2), Ubon Ratchathani (1), Phitsanulok (1) and Mukdahan (1), while one person was missing in Nan and another injured in Chaiyaphum, he said. A total of 1,438 residents were evacuated from 15 at-risk locations in the four provinces of Khon Kaen, Amnat Charoen, Yasothon and Ubon Ratchathani.

The department joined with provincial officials, along with army and related agencies, to provide workers and tools to aid the disaster victims and address the flooding by installing pumps to drain water out of affected areas, Chayaphol said. Flat-bottom boats were sent in to help move people’s belongings and to aid in transportation, while officials also surveyed damages to provide further help as per a Finance Ministry regulation, he added.

As parts of the country are still suffering heavy rains that pose the risk of flash floods, forest runoffs and landslides, department officials will closely monitor the situation and prepare to provide timely aid to affected residents, Chayaphol said.

He urged people to follow weather reports closely and to call for help to the department’s hotline 1784 around the clock.