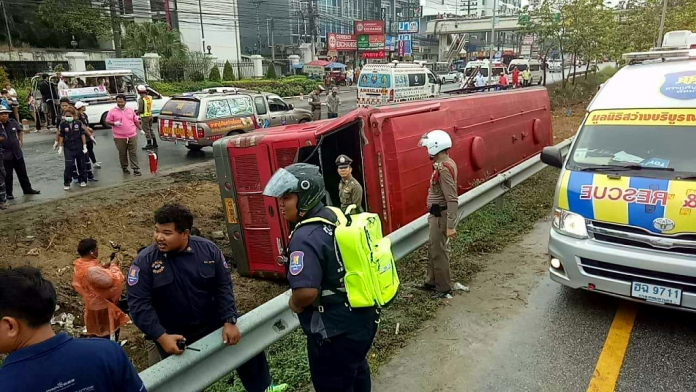 The Department of Land Transport has begun a huge crackdown on public transport in Thailand on orders from the new transport minister Saysayam Chidchob.

One of the new measures is to actually ask passengers en route if the driver is driving properly and sensibly.  If they are not they face being stopped from driving there and then.

More than a million drivers and other personnel will be checked – many to discover if they can actually see straight. Additionally, 150,000 vehicles will be assessed for road-worthiness.

The checks will be done at gas stations 90 kilometers apart on roads throughout the kingdom.

DLT chief Pheeraphon Thawornsuphacharoen said that the crackdown was ordered by Saksayam and involved checking the efficiency and capabilities of drivers of all public transport vehicles – that is 1,203,790 personnel.

Drivers will be checked for their recognition of colors, reaction times and long-distance and near vision.

What has been called “Checking Points” have been set up in gas stations 90 kilometers apart on 111 routes covering 22,048 kilometers of Thai roads.

In total there will be 245 Checking Points to examine drivers and their vehicles. They will run 24 hours a day.

Drivers who are exhausted or who have been drinking alcohol face being taken off the road and having their vehicles seized.

In addition, passengers will be asked about drivers to see if they have been speeding or driving erratically. This includes foreign passengers.

Officers will have the discretion to pull drivers off the road if they are deemed to be driving badly.

Saksayam has been in the job just a few months since the new cabinet was formed following the general election and has been one of the most active and quoted of the new ministers.

The latest moves may be part of a wider plan to improve standards on Thai public transport.