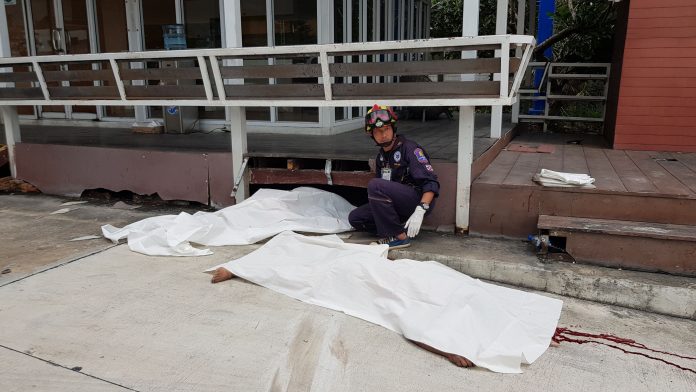 Two pedestrians die after being hit by sedan in Banglamung

Two pedestrians died after being hit by a vehicle near a petrol station before noon in Banglamung today.

Nongprue Police were notified of an accident near Susco patrol station on Sai 36 Road in Pong Sub- district.

Police and emergency responders arrived at the scene to find a truck overturned on the road. Nearby, they found a heavily damaged vehicle.

On the side of the road they found two dead bodies which were 51 year old Pakrit Saraisang and 43 year old Rachen Pansri.

The sedan driver sustained minor injuries and was taken to a local hospital.

The truck driver, who was not injured, 46 year old Nakrit Jampathong, says he was turning into the petrol station when the sedan crashed into the side of the truck, flipping it over.

The sedan then hit two pedestrians walking across the station parking lot where they were pronounced dead at the scene.

Police are checking CCTV footage nearby for further investigation. They did not release the name or details about the sedan driver to The Pattaya News.