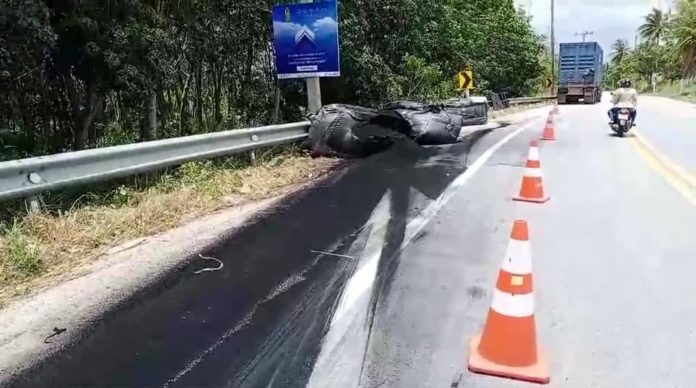 Chonburi Banglamung – Chemical powder was scattered on a road today, August 12th, 2019, after a trailer accident.

Huay Yai Police Chief Col Chutidet Jansong was notified of an accident on Baan Pusai Road in Khao Maikaew at about noon today.

Police, The Pattaya News and other media and Sawang Boriboon rescue workers arrived at the scene to find two bags of chemical powder spilled across the road.

Nearby, the Police found black powder and a trailer. The driver, 25-year-old Sompong Sritoe, was waiting at the scene.

The driver told The Pattaya News he was carrying bags of black carbon (a compound used to make car tires) to a local factory. As he approached a sharp curve in the road, he lost control of his vehicle. The road has since been cleaned up. There were no injuries and Police Chief Col. Jansong stated that the chemical spill did not cause any extensive damage.

The driver was taken to the police station for further legal action.