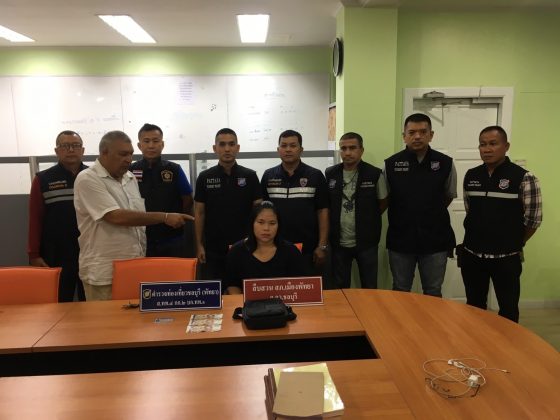 At 09:00 this morning, March 21st, 2019, Pattaya city Police arrested Ms. Piyaphat Khaobutdee, 23 years old, who was accused of stealing from a Pakistani tourist in the amount of 3,000 baht cash from his room in the early morning hours of the same day.

Around 2:00 AM this morning, Mr. Kumar Ashook, 53 years old, from Pakistan approached the police booth on Walking Street with a complaint.

Mr. Ashook stated that he brought Ms. Khaobutdee to his room as she approached him on the road and said she needed a place to sleep. Mr. Ashook, who stated he agreed to give her a place to rest out of the kindness of his heart, took her back to his room.  He proceeded to bring her to the Wiz Hotel, Soi Thap Phraya 8, and after went for a walk on Walking Street.

Mr. Ashook then found that the cash stored in the pants pocket had been lost for 3,000 baht. He told the police that it was expected that this young woman took it. The police then invited him to investigate and file charges, which he accepted.

Police managed to quickly locate Ms. Khaobutdee as the reception at the hotel had taken a copy of her ID. She admitted to taking the cash from the tourists pants pocket and will be facing further charges of theft under Thai law.

Mr. Ashook was very happy with the quick action of the police and praised them for catching the criminal quickly.

Pattaya Police, led by the new Police Chief, gave Mr. Ashook flowers and apologized on behalf of the city for the poor experience.