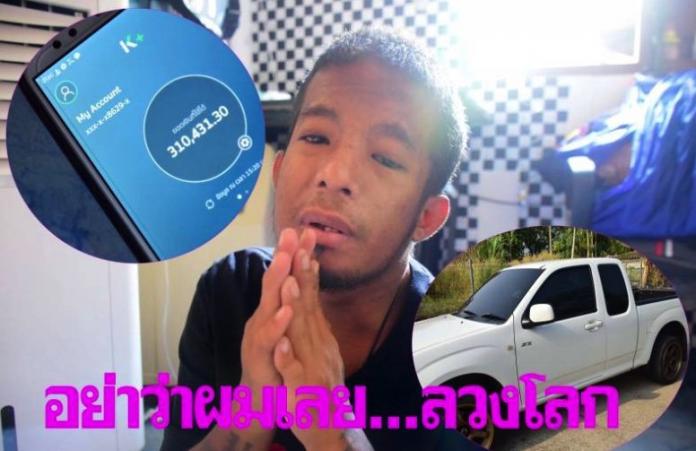 A Thai man suffering from kidney disease has apologized for buying a pick-up truck after kind people donated 800,000 baht to him for treatment.

Though his statements in defending his actions are likely to do little to mollify a storm of criticism leveled at him on Thai social media.

He also denied buying his girlfriend an expensive phone – no, that was for me he said in mitigation.

Daily News went to the Laem Ngop, Trat home of Sorayuth Phuangsa-art, 28, yesterday after social media slammed him for wastefulness.

He was undergoing home dialysis when the reporters arrived. He is suffering from Stage 5 kidney disease.

He gave a wai and apologized.

He admitted buying a pick-up but it was in his name, he said. Not in the name of his father as erroneously suggested on social media.

He had been renting a neighbor’s vehicle for 3,000 baht so he decided to buy one for himself so he could take the results of his dialysis to a hospital in Chonburi.

This saved money, he said.

He also denied he had bought his girlfriend a phone. He said that pictures of him with the girlfriend were put on social media by someone. They were taken ages ago before he was ill and before they split up.

No, he said, the phone was for me. Sorry about that, too.

“I was not wasting money from the donations”, he said, “I am using it wisely”.

He added that if he recovers he can use the pick-up to earn a living.