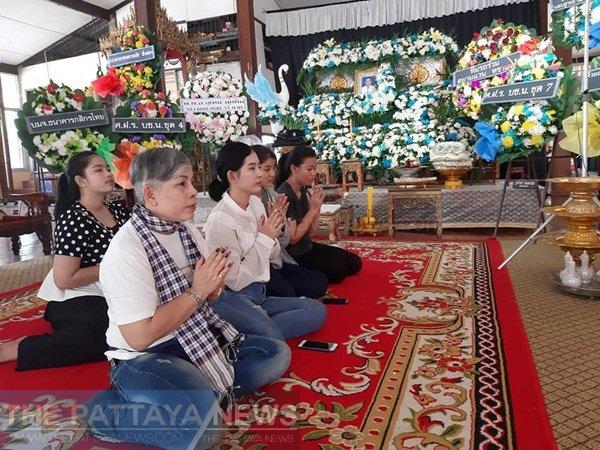 A distraught daughter has gone to the media for help after her father was robbed by a hospital security guard and left for dead in the car park. Her father appeared to have had a heart attack.

The police are said to have let the thief go and the hospital – who promised help – have done nothing except send a wreath to the funeral.

Anucha Changsri, 25, was speaking to Manager on Monday after her father Chayakorn Changsri, 49, a taxi driver, died in the car park of Nong Khai Hospital in Saraburi.

Chaiyakorn, originally from Uttaradit had been suffering from a heart condition.

Anucha said he had gone out in his taxi as normal from his home in Kumhak sub-district, Nong Khae, last Wednesday morning.

But as he was driving his taxi he suffered severe chest pains and drove himself to Nong Khae Hospital. As he was exiting his cab in a section of the car park he fell onto a metal spike protruding from a lump of concrete during what seemed to be a heart attack.

By this time he was now still and it appeared he had suffered a heart attack.
,
A change of the security guard shift later found him dead and the police were called.

CCTV was examined and it clearly showed her father pass out and fall. A security guard passed by and offered no help.

Instead, he walked round the taxi twice before stealing her father’s wallet. She thought it probably contained 10,000 baht as she knew he was on his way to pay an installment for a car later that day.

Following the theft of the wallet, the security guard strolled off back to the booth as if nothing had happened. The guard never contacted anyone for assistance.

Anucha said that she pressed charges against the guard with police but they let him go. When they later went to arrest him at his lodgings behind the hospital he had fled.

She said that she believed that the security guard had been dismissed by the hospital on Thursday the day after the incident.

The hospital director promised the family to help in any way they could.

But it was just empty words, said the grieving daughter.

No representative of the hospital came to the funeral – they just sent a wreath.

Now she wants justice for her father.

Thaivisa notes that so far the CCTV footage appears not to be in the public domain.