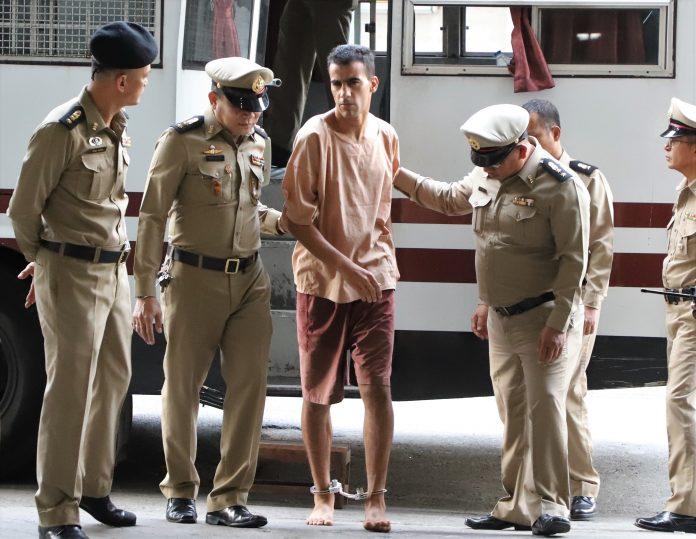 BANGKOK — A refugee footballer who refused voluntary extradition Monday to Bahrain was told to appear in court again in April.

An outpouring of anger met the Criminal Court’s decision to give Hakeem AlAraibi until April 5 to file an appeal against extradition proceedings, with a hearing to follow on April 22. The decision not to immediately release the Bahraini national despite his refugee status in Australia prompted calls for sanctions.

The Australian football players’ union called on the International Olympic Committee and football’s governing body to consider sporting sanctions against Thailand and Bahrain over AlAraibi’s continued detention in Bangkok. He’s been held behind bars since he was taken into custody at Bangkok’s airport.

The top Thai twitter trends were dominated by topics related to the footballer, who pleaded outside the court not to be sent back to Bahrain. He was brought to the hearing with his ankles shackled.

Didulica also said it has only been pressure from the international soccer community that has prevented AlAraibi’s extradition to Bahrain.

Nadthasiri Bergman, the attorney representing AlAraibi, said they’re ready to file an appeal as they have enough evidence to show that his warrant from Bahrain was politically motivated. She said her client has been sick and highly stressed by his detention, adding that they are seeking ways to win his release from prison after the court denied bail.

In court, AlAraibi said Bahrain accused him of a crime – vandalizing a police station – that occurred while he was playing a televised football match, adding that he believes he was prosecuted because he sought asylum in Australia.

Mark Warnock, the spokesman of the Australian Embassy in Bangkok, said after the hearing today that Bahrain’s government had never sought AlAraibi’s extradition from Australia although it knew he had been living there as a refugee. He said it immediately filed a request with Thailand once it learned that the footballer was traveling here with his wife for their honeymoon.

He declined to say whether the Australian government has directly contacted Bahrain over the case.

AlAraibi has been held in Thailand because Bahrain has asked for his return to serve a 10-year prison sentence over the alleged vandalism. He fled to Australia in 2014 and won political asylum there in 2017. He plays football for a semi-professional team.