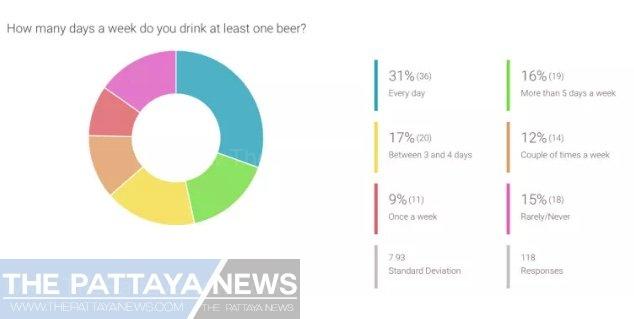 An Online Survey conducted by Thai Visa showed the shocking results that Pattaya expats drink more than the country average and more than any other city in Thailand.

This survey, however, likely does not surprise any local residents.

The survey has shown that almost a third of Pattaya expats have a beer every single day.

This is compared to a Thailand wide average of about one in four.

The survey also revealed that some expats may be killing themselves with their beer consumption.

A staggering 7% admitted to imbibing 50 bottles a week.

Figures from the UK showed that this was not safe, the survey claimed.

Some 64% of 118 respondents in Pattaya admitted to having a beer three times a week.

There were also details about those who abstain:

Individuals who abstain in the UK amounted to one in five of the population.

But in Thailand that dropped to one in ten.

In detail 31% of Pattaya expats said they had a beer everyday.

In the whole of Thailand this was 27%.