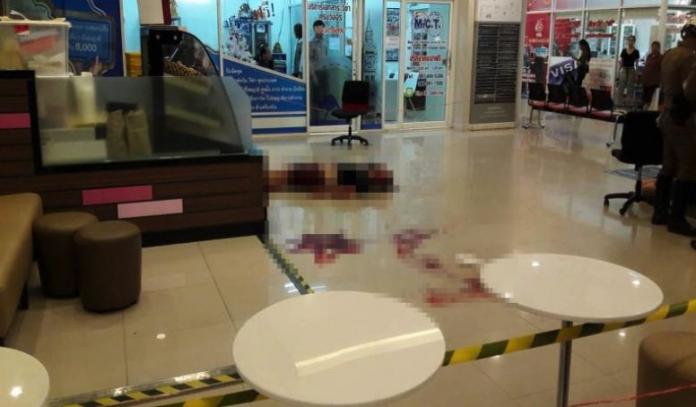 A Bangkok police sergeant has turned himself in after allegedly shooting dead a French tourist on Wednesday morning following a fist fight in a Bangkok Bar.

His fellow officers had already been summoned to the ground floor of the Trendy Building, where the Frenchman, Malik Djamel, 35, lay dead in front of a doughnut shop with a bullet wound to the head and chest. Mr. Djamel had been shot twice in total.

His Thai girlfriend, identified only as Kwanjira, told police that Djamel had quarrelled with a Thai man at the Lucky Shot bar on Sukhumvit Soi 11/1 a few hours earlier. The argument was alleged to be about the girlfriend a case of jealousy. The verbal argument escalated to a fistfight, which witnesses stated the Frenchman won, causing the Thai man to retreat and flee. She stated that both men were intoxicated at the time of the incident.

Kwanjira said she and Djamel were returning to their room on the eighth floor of the Trendy Building when Mr. Huadrsi reappeared and shot her boyfriend dead in front of a Dunkin Donuts shop in front of horrified bystanders.

The murder was caught on a security camera and the gunman was allegedly identified as Kantapong.

Immigration Bureau chief Pol Lt Gen Surachate Hakpal instructed investigators at the Lumpini station to handle the case in strict accordance with the law and not try to assist their colleague.

It is being reported at press time that Mr. Kantapong will face the full extent of maximum punishment under Thai Law and has been terminated as a police officer. The French Embassy has been informed and is working with police officials. It is unknown at this time if the man’s family has been notified. Mr. Djamel had been living in Thailand for some time and according to his girlfriend had been looking for a permanent job here.