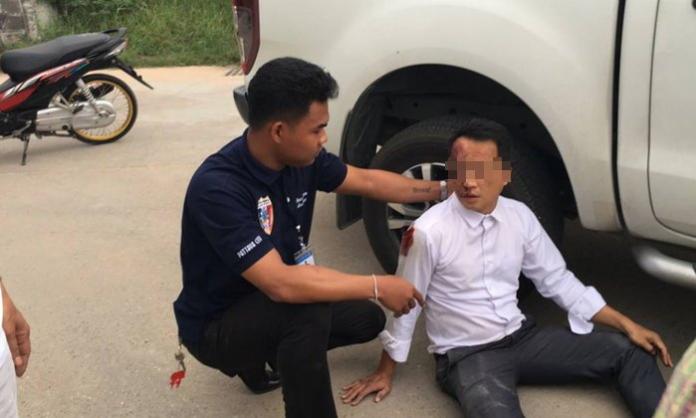 A local lawyer is in intensive care in a Pattaya hospital after reportedly being attacked in the street by two men armed with a wooden club.

Sakchai Amnuaypornphaisan, 49, was taken to Bangkok Pattaya Hospital with bruising and wounds to his body. Doctors said he was being closely monitored after a brain hemorrhage was found.

The attack followed a minor accident on Soi Rong Mai Khit, Bang Lamung when there was a collision between Sakchai’s vehicle and a motorcycle on which there were two men aged about 20-25. Sakchai and a relative, Lakchai Kornwichon, 52, were waiting for a light at an intersection when a motorcycle with two Thai men ran into them at a low speed. They now suspect the motorcycle crashed into them on purpose.

No one was hurt and Sakchai got out to inquire about the welfare of the men, said Lakchai.

Lakchai said that Sakchai, a lawyer, was a good guy who had no problems with anyone. He asked if the men were hurt and everything seemed amicable.

Lakchai then stated that suddenly one of the men removed a club from the motorcycle and attacked Sakchai violently. The men then proceeded to get back on the bike and race off.

Lakchai suspects that the attack was ordered by a disgruntled client of his relative as there seemed no other explanation for the over-the-top violence.

Police are reviewing CCTV in the area and are on the hunt for the suspects.