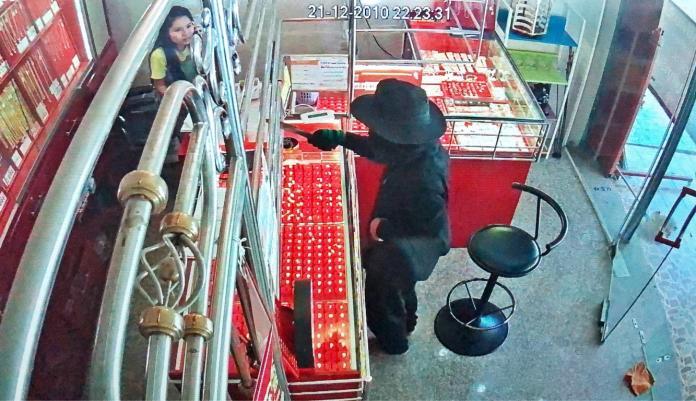 A 23 year old Thai Man, Mr. Tanin Samran, got more then he bargained for when he attempted to rob a gold store in Sattahip on November 26th, 2018 around 11:00AM.

Mr. Samran, who was wearing a mask and heavy clothes to attempt to disguise his appearance, ran into the shop with an eight inch knife and demanded gold from the cashier, who was behind a protective barrier.

The cashier, Ms. Rungnapa Phan, 25, responded by hitting a security system that summoned the police and auto locked the heavy front doors. She then fled to the back office of the shop to await police.

Mr. Samran attempted to flee but the heavy doors blocked his escape. Defeated, he sat and waited for the police. The police, led by Lt. Col. Chalith Prem Prapipat, arrived and negotiated with the man through the front glass. The man agreed to surrender peacefully.

The police praised the young cashier for her efforts in operating the security system and not panicking.

Mr. Samran, who stated he was desperate for money and had nowhere to turn, will be facing significant charges for armed robbery and is currently in jail in Sattahip awaiting his court case and charges. He faces up to five years in jail for the offense.