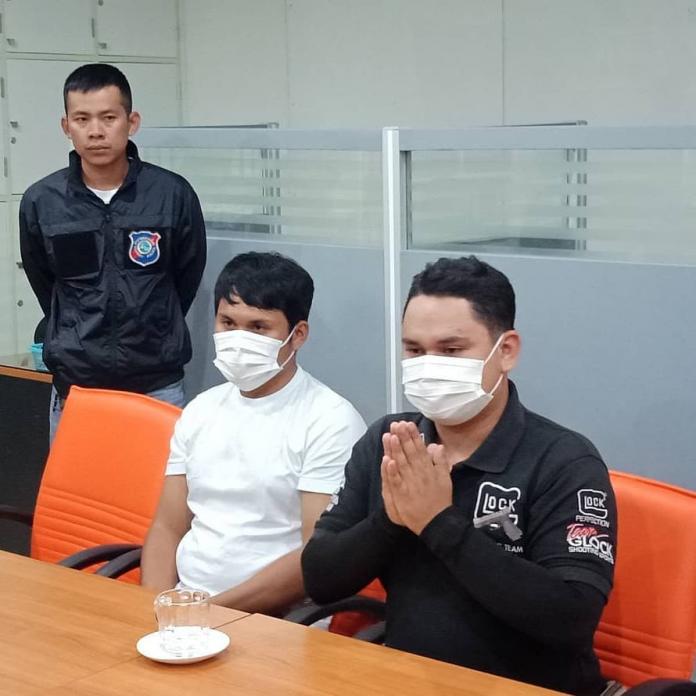 Wissanu Ketmuenwai, 27, and Krirkchai Khanthawong, 24, were arrested by Police and the Special Affairs division of Pattaya City and were brought to Pattaya police station for interrogation at 11:30pm on November 9th, 2018.

The arrests were made after a Thai guide led two Chinese tourists to file complaints at the police station on Thursday, November 8th, 2018. We previously reported on this incident the prior day.

The two tourists said they were fined for dropping cigarette butts at the Bali Hai pier but the two, who claimed to be Pattaya City officials, failed to issue them receipts. Additionally, they were not wearing proper uniforms and briefly flashed what the tourists believed at the time were an official badge.

The tourists were charged 4000 baht instead of the 2000 baht as stated by the law. The tourists saw a sign, which is in Mandarin as well as Thai, after the incident and decided to complain to their tour guide. The guide brought them to the police station for the complaint. The police then reviewed CCTV at the pier and identified the two fake police officers.

Pattaya City said the two were temporary employees hired via a third company to keep the pier clean (Primarily Janitorial Work) and they had no authority to make an arrest or collect a fine as Pattaya City officials.

The administration ended their employment immediately and they were charged with unlawfully acting as officials without authority, which violated Article 145 of the Criminal Code.