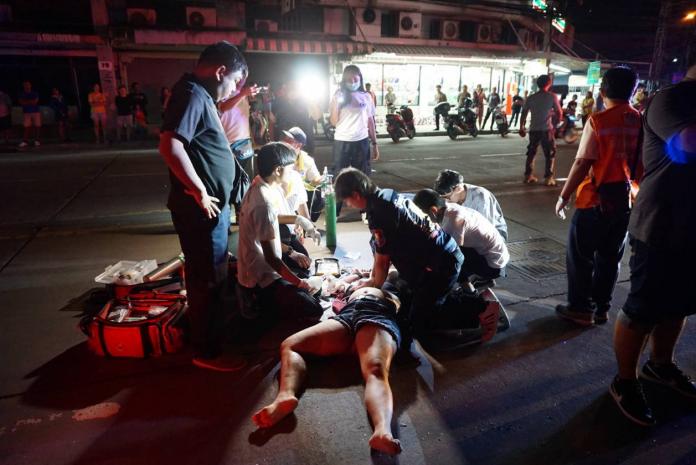 At 12:30AM last evening, October 29th, 2018 in Pattaya near Soi Thepthi 9, a Filipino tourist was struck by a speeding vehicle driven by a 37 year old Thai man while crossing the street with four friends and critically injured.

Maria Rosario Paloma and her friends were crossing the road when a Toyota driven by Mr. Ekpong Pibulrat, 37, struck her attempting to swerve around them instead of slowing down to allow them to cross the road. Ms. Paloma, whose age was not given to the Pattaya News, sustained serious neck and back injuries at the scene. She was taken to a local hospital for emergency treatment and surgery. She remains in critical condition as of October 30th, 2018.

Mr. Pibulrat tested negative for drugs and booze at the scene of the accident. Witnesses, however, stated that he was driving at a very high rate of speed and the group of tourists were highly visible crossing the street. The witnesses stated that the tourists saw him coming and refusing to break and attempted to run but Mr. Pibulrat, attempting to swerve around them, still hit Ms. Paloma at high speed.

Police will be reviewing CCTV as they determine further charges.