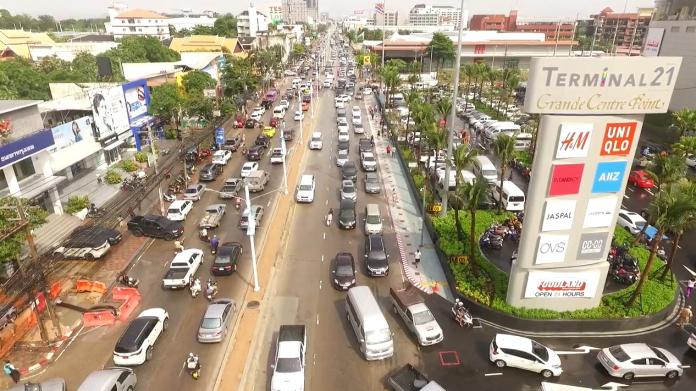 The head of the Pattaya Traffic Police requested an urgent meeting this afternoon around 1:00PM with the executive management of the Terminal 21 Shopping Mall in Pattaya to discuss major concerns from the public and city officials over traffic issues the mall was causing in Pattaya. 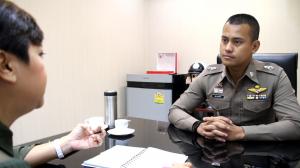 The mall, which had opened on October 19th, was certainly popular with tens of thousands of local residents, tourists and Thais from all over the country coming to visit the expensive and beautiful new mall. Reviews of the mall were nearly universally positive, praising the layout, the selection of stores, the architecture, the food court and more. However, the reviews of the traffic the mall was causing was universally negative. 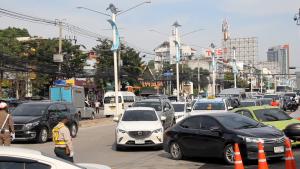 Social media users took to many popular expat and Thai resident groups and complained loud and long, stating that it was the worst they had ever seen traffic in Pattaya. Traffic was backed up for several kilometres in nearly every direction all weekend long and was almost at a standstill. Local residents stated that they were unable to get to work or perform simple errands. Motorbike taxi drivers we spoke to stated that even a motorbike was not helpful getting through the standstill traffic and it was affecting their business.

The head of the Thai Traffic Police stated that although he felt his staff and team were prepared for the opening weekend, they had not anticipated the amount of people who went to visit the mall. Additionally, he stated to the press that Terminal 21 had not adequately prepared themselves for the traffic, thus the meeting.

Terminal 21 Pattaya has agreed to clearly paint red and white no parking lines on a small road that forms an inner loop throughout Terminal 21. This loop was a major problem throughout the weekend as many people parked their cars in the loop on the side or were waiting to pick people up or drop them off further backing up traffic. Enforcement of no parking or stopping on this loop will be strictly controlled, state the Traffic Police and mall management.

Additionally, clearly painted pedestrian walkways will be put into place this week providing a central point for pedestrians to cross the street to get to the mall. Lack of pedestrian walkways according to Traffic Police also caused major traffic issues and confusion throughout the weekend.

Finally, the mall has only been open for three days and the Traffic Police and mall management believe the traffic issues will not be as severe in the future as the level of people who want to see the new mall decreases.