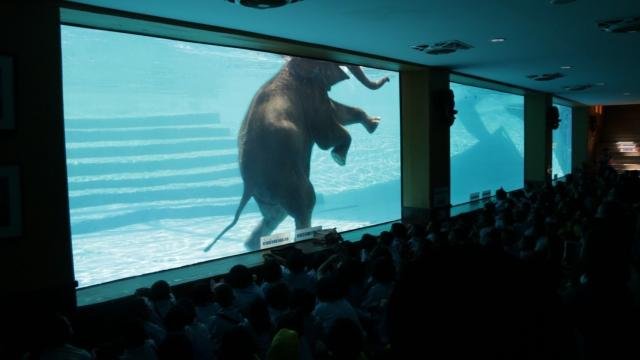 The director of the Khao Kheow Open Zoo, Mr. Appaporn Sriheran, has told Pattaya press and local news organizations that “Foreigners don’t understand Elephants” in response to growing complaints and criticism from foreign press and animal rights organizations in the UK and United States regarding the elephant shows at the Zoo. The director also stated that the majority of people complaining have never visited Thailand and should not tell Thai people what to do in their own country.

The zoo, which is one of Pattaya’s top tourist attractions and has thousands of visitors daily, states that the elephant shows are educational for tourists and students and they have no intention at stopping them. This includes the water show which features elephants on hind legs in the water moving around a pool with a lower deck which allows visitors to watch the elephant from underwater. The show is arguably the most popular attraction at the zoo.

Calls were made in the UK’s mass circulation The Daily Mail for the show to end. A petition on Care2 responded to by animal lovers worldwide also called for the show to stop. UK news media said that activists want it stopped because mahouts are forcing the elephants to act unnaturally with enticements of food.

The show, with “Pang Saeng Dao” the star of nine elephants who take part, has been going on two or three times daily for five years during normal feeding times.

Each show in the four meter deep tank lasts about ten to fifteen minutes. Hundreds of tourists and students view via an underwater viewing area 30 meters long.

Mahouts (or elephant handlers) told the associated press that this is natural elephant behaviour. The elephants breathe through their trunks and stand on their hind legs as they would do in the wild.

They said the elephants willingly enter the water for the show.

Director Appaporn agreed saying that it was educational for tourists and students to learn about elephant behaviour in water. The crowd get a great view of this in the area underwater, he said.

He said that the practice of the mahouts riding on the neck of the elephants was ended two years ago and replaced by the handlers encouraging the elephants with promises of food around the edge of the tank.