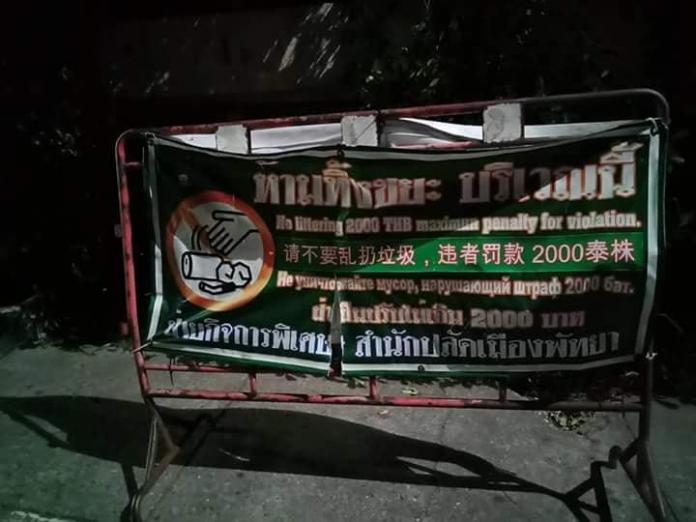 When a Chinese tourist was caught littering in Pattaya little did he know that his complaint would lead to the chief of immigration and the arrest of two people and prosecution of a tour company.

Yu Jiang Min of China admitted tossing some trash where he should not have at Bali Hai port and was spotted by a “tessakit” (municipal officer) for doing so. The officer approached him and demanded that he pay a fine for littering, which Mr. Min was not against paying.

His boat was about to leave so the two guides on his tour – Jiang Yu Hang and Udom Sae-Yia – said they would sort out the fine for him.

They got a receipt but Ju Jiang Min noticed that the sum he had to pay was 3,000 baht and had been altered on the paperwork.

The guides said they had done him a favor and bargained down the payment from 5,000 baht. However, Mr. Min, who can read English, could clearly see the signs that state the fine on the pier said 2000 baht.

He was dissatisfied and later went to the police where it was discovered that the fine had in fact been altered from 2,000 baht so the guides could make some extra money on the side.

The ruse led all the way to Maj-Gen Surachate Hakparn the new head of Immigration who announced a swathe of arrests today, October 11th, 2018 and both guides were arrested after they were found to be working illegally on temporary visas and were further charged with tampering with state documents. One of the two men was a Chinese national.

Additionally, the company they worked for “Thai How Are You Co Ltd” based in Wang Thong Lang faces charges for hiring illegal workers. The company owner was named as Wichian Phromwichai, a Thai national.

A huge vinyl board at the arrest press conference proclaimed “illegal guides arrested for fine fiddle”.

Major General Surachate has stated that foreigners working in jobs prohibited to them, such as a tour guide, will be deported and prosecuted.