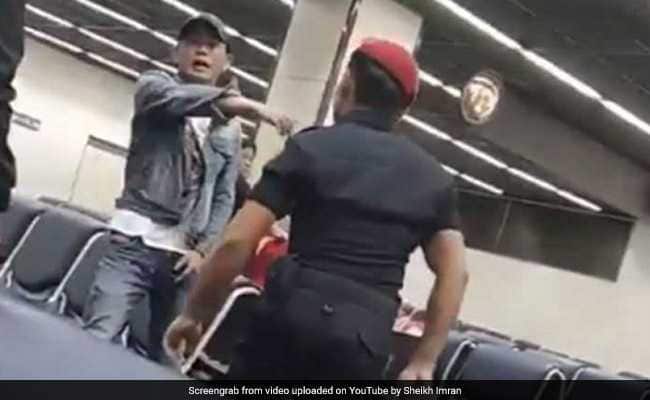 China is Thailand’s biggest source of tourists, making up about a quarter of its 35 million annual visitors.

However, a boating disaster on the popular island of Phuket in July that killed dozens of Chinese vacationers has caused a drop-off in visits and put Thailand on alert for problems that could impact the market.

A video clip on September 27 at Bangkok’s Don Mueang airport, which shows a guard briefly scuffling with and then hitting a man, fell into that category and quickly set off reactions from some of the highest levels of government.

Sunsern Kaewkumnerd, a spokesman for the government, said Sunday that Prime Minister and junta leader Prayut Chan-O-Cha was “deeply upset” by the incident.

“The prime minister thought that even though the tourist could not produce documents to reaffirm his accommodation and legal status in Thailand, refused to stay in a detention room, cursed and insulted officers, refused to follow orders even in his native language, attempted several times to run away and acted inappropriately with officials, still officials must compose themselves and treat him in line with international practice.” Sunsern said in a message to reporters.

He added that two senior airport employees had been suspended and the guard was terminated from his position.

One of the employees, Suthirawat Suwannarat, who is the general manager of the airport, received a 30-day suspension after meeting directly with the highest levels of the government who also met with officials from the Chinese Government. The investigation into airport policy will continue.

“We cannot deny responsibility over this shortcoming and I regret and apologise to the Chinese tourist,” he told reporters on Saturday.

“Although we have a right to defend ourselves, in this case it was not reasonable and the tourist was frustrated and not an actual threat.” he said.

The tourist was identified as Mei Ji and had arrived via a flight from Jakarta, the airport authority said. It added that he had refused to wait inside a room, refused to follow orders from airport and police officials, refused to speak to a translator, continually insulted and cursed out officials and police and refused to speak with any supervisor or superior. It also stated that he attempted to escape or “run” through Passport Control several times.

He was later deported and it was found that his paperwork was indeed false and he had no valid VISA to enter Thailand but not before the encounter had been filmed on mobile phones and uploaded online and entered into the court of public opinion.

The quick response from Thailand highlights lingering sensitivity over the Phuket disaster, in which nearly 50 people died. Authorities continue to state that although Mr. Mei Ji was indeed violating the law and not cooperating at no point should he had been physically hit by an official.

The Ministry of Tourism and Sports has estimated that it would lose more than half a million Chinese tourists angered and scared over the boat tragedy.

In August some 860,000 of the 3.2 million tourists who visited Thailand were Chinese, according to government statistics.

The numbers represent a nearly 12 percent decline in Chinese visits from the same period last year.

The video is below. As a note, the title is incorrect-no fines or abnormal expenses were applied as multiple sources have confirmed besides the tourist being instructed to pay for a flight back to his country after having no valid VISA to enter the country.