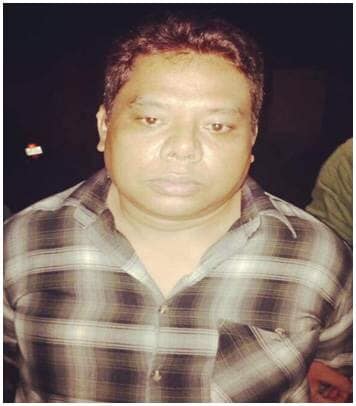 He is expected to be extradited on Friday (August 17).

The victims’ families, tearful with relief upon hearing of Panya’s capture, urged the authorities to enforce justice.

It meant all of those thought to be involved in the July 29 killing of Paweena Namuangrak, 20, and her friend Anantachai Jaritrum, 21, in daylight at Sattahip district’s Khao Chi Chan “Buddha Mountain” were arrested.

The 39-year-old suspect was apprehended in Cambodia while he was allegedly about to flee to Vietnam.

The extradition of Panya was underway, he said.

A source said the office of police inspector-general General Suchat Theerasawat had sent a team to cross the border on Wednesday and a police conference would be held at the Royal Thai Police head office in Bangkok on Friday.

Paweena’s mother Wanpen Namuangrak said she would not forgive Panya.

“Our family is traumatised beyond forgiveness by Sia Auan’s action,” she said. “I hope the authorities prosecuted him leading to a capital punishment. I believe my daughter’s spirit is at peace and wants the judiciary to inflict the maximum punishment.”

Praising the police for their swift action, Anantachai’s mother Jomsri Chompoopeun said she did not want revenge but believed he will be punished as severely as he had done to her son.

The five others arrested were one alleged shooter Narong Warintharawet, 22, Krissana Sisuk, 22, who allegedly rented the house where the murder was plotted and allegedly drove Panya to provide protection, Jeerasak Unaiban, 34, who had been tailing the victims’ rented car and provided information to the alleged killer, the alleged spotter Sayan Sisuk, 43, and Kiattisak Surangsaengoonmee, 35, who purportedly drove the getaway pickup.

The couple were at Khao Chi Chan at around 5pm on July 29 to make merit to mark Paweena’s birthday.

Police believe the killings might have been motivated by Panya’s jealousy after Paweena moved from Phuket to Nakhon Pathom with Anantachai for work.