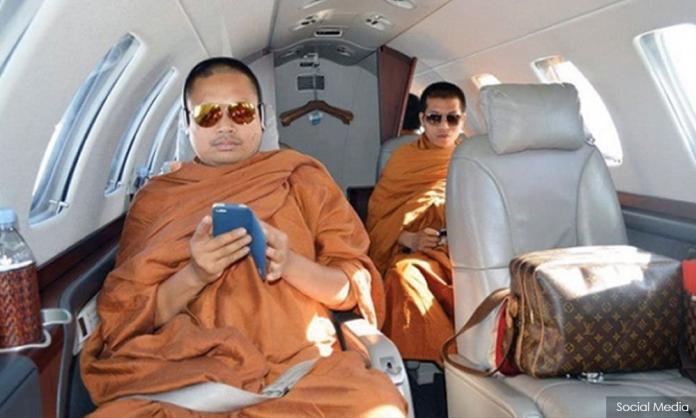 A Thai court has sentenced a disgraced former monk to 114 years in prison for charges including fraud, money laundering and computer crime.

Wiraphon Sukphon became known as the “jet set monk” after he was appeared in a 2013 YouTube video on private jet, wearing sunglasses and showing off wads of cash and Louis Vuitton designer bags.

A subsequent probe seized $770,000 of his assets, including a Porsche and a Mercedes Benz car, and multiple bank accounts.

Wiraphon, 39, was convicted on Thursday after being extradited from the US in May after being accused of raping a minor and deceiving donors who gave him money to build the world’s largest emerald Buddha image.

The monk was required to return $861,700 to 29 donors who filed complaints and the verdict for the alleged rape, which dates back ten years, is expected in October. He faces an additional 20 years behind bars if convicted.

However, despite Thursday’s hefty sentence, a lawyer acting for Wiraphon told AFP that under Thai law he would not actually serve more than 20 years, meaning that he would be released before he turns 60. His legal team are also planning to appeal.

Buddhism is deeply engrained in the fabric of Thai society and most men are expected by social convention to spend time in a monastery as novice monks to gain religious knowledge and good karma.

But a series of sex, financial and murder scandals in recent years has also tainted the clergy’s reputation and tested the patience of the government, to the point where the authorities have floated the idea of “smart ID cards” for each monk to record their criminal history.

The government has attempted to clean out corrupt monks using their orange robes for personal gain and have been engaged in a long-standing feud with the Dhammakaya temple, an elderly abbot who is accused of embezzling $33 million.

Wiraphon previously claimed he was the reincarnation of a famous miracle-performing monk before he was disrobed by his temple in the rural town of Buriram when the first allegations of wrongdoing surfaced.

He fled to the US and established a Buddhist centre in California but a US court ordered his extradition after a request by the Thai authorities.