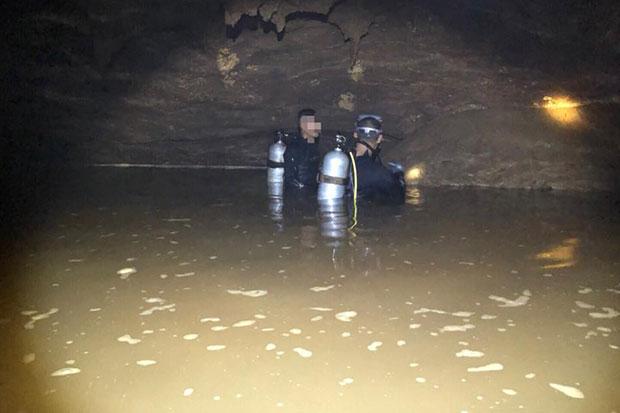 Rescuers are planning a second attempt to try and get through a small, flooded passage inside a Thai cave to search for 12 boys and their football coach who entered the cave two days ago on a field trip.

On their first attempt at dawn, divers were unable to reach the large chamber deep inside the cave where the students might be, said Kamolchai Kotcha, an official in the forest park where the cave is in northern Thailand’s Chiang Rai province.

The passage to the chamber is extremely small, “flooded and covered with sand and mud,” Kamolchai said.

The large chamber is about 4km (2.5 miles) from the entrance of the cave that’s thought is be about 6 to 8km long.

The 12 boys are aged 11-15 and are believed to have entered the Tham Luang Nang Non cave with their coach late Saturday afternoon. A mother who reported her son never returned from soccer practice that day set off the search.

The cave can flood severely during Thailand’s rainy season, which runs from June to October.

According to Kamolchai, tourists trapped in the cave by past floods have been rescued after the water receded a few days later.

Officially, the cave was closed for rainy season and warning signs were put in place. Park rangers generally lead tourists into the cave in dry season, however, the team and their coach decided to enter despite the warnings. The cave is not a dead end and is attached to other caverns as well so the hope is that the team is alive and well deeper in the system, which according to authorities does not flood.

Currently, as of 4:00PM on Monday, a team from the Navy’s Underwater Demolition Assault Unit is assisting and swimming through the flooded cave to attempt to reach the trapped soccer team.

We will provide further updates as we get them.