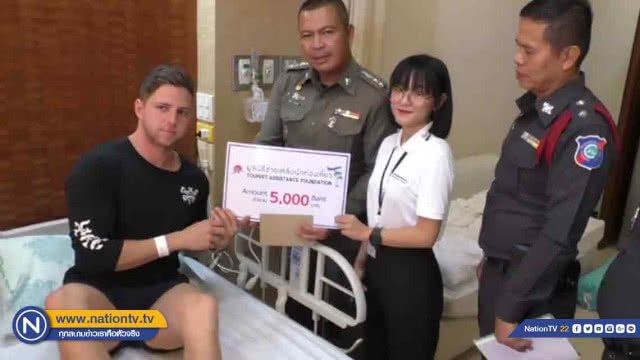 Even more twists and turns in the case of an Australian man stabbed in a Thai disco by a still un-named Israel tourist.

Jeremy McCall, 22, gave an interview to the media in Australia today as he returned home. He is now in stable condition and is now in a hospital in Sydney. He stated his recovery is going well and he is expected to make a full recovery and back to normal life soon, luckily.

Jeremy stated his best friend, Jaydon Sienkiewicz, was named as the victim incorrectly by the local authorities and press due to giving an interview to the police right after the stabbing and a language barrier. Jaydon was with him the evening of the stabbing, along with a party of about ten, including his father and Thai step-mother.

Jeremy claims, despite what the video shows, that him touching or pinching the ass of the girl was incorrect and doesn’t show the whole story.

Jeremy states that the woman named was not a girl-friend of the Israel man who stabbed him but a woman who had been partying with him and his friends for several hours earlier in the evening. He claims that he did not grope her or grab her but was attempting to get her attention as his friend was looking for her as she had been gone for some time and was pulled away by the Israeli man.

Jeremy states that the police reviewed earlier footage and confirmed this. However, this has not been confirmed in a public statement by the Thai police.

He stated that he was not aware he was stabbed and at first thought he had spilled some wine on his shirt. When he pulled up his shirt his family and friends saw the extent of the damage and sent him to the hospital.

The Israeli man fled the nightclub seconds after the stabbing, booked a nearby taxi to the airport and fled the country on the first flight out, likely quickly understanding his reaction was severe and would lead to major repercussions.

Thai authorities are still working with the Israel embassy on reaching and contacting the man to take responsibility for his actions.

Mixx disco gave the man 5000 baht to help towards his hospital bills and apologized to him for the incident happening in their night club, which Jeremy said he accepted. Police state that Mixx will not face any repercussions for the incident as they reacted quickly and handled the situation well, assisting with calling police, an ambulance and the CCTV footage. Mixx does have a patdown system to look for weapons but police state the knife used was a very small and highly concealable flip knife that was likely hidden elsewhere on the man to get into the club.