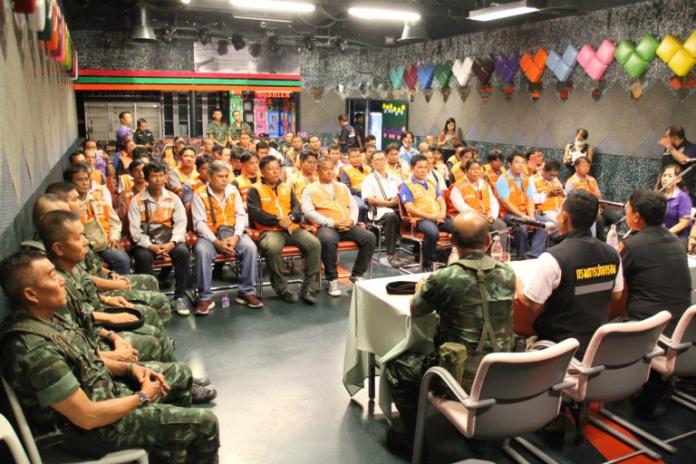 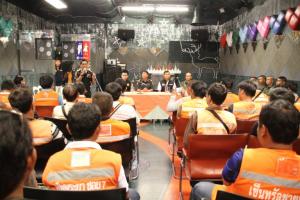 As we reported previously, motorbike taxi drivers in Pattaya have again been in the news recently after an attack on a German tourist, Andreas Bauer, after he attempted take off a clamp on his seized motorbike as he had no license in, what he self described, as a moment of panic.

On Sunday, the 20th, around 3:00PM the head of each motorbike taxi stand in Pattaya (Every stand has a supervisor) was summoned to Alcazar on Second Road for a meeting with top Thai officials.

Officials from the Department of Land Transportation, the military and Bang Lamung district representatives were present.

The motorbike taxi drivers were told that despite reorganization, multiple training sessions, appeals for assistance and re-certification for all drivers that they were still mis behaving. The supervisors were reminded that motorbike drivers were the “Face of Pattaya” to many tourists and the community and that the action one bad motorbike driver took damaged the reputation of the entire city and all motorbike drivers.

Their message was very clear to the drivers: Be fair, charge consistent and reasonable fares per Thai law and do not get involved in disputes between tourists and business owners, instead, call the police to handle the situation. The days of motorbike drivers helping be “reinforcement” for drunken or problematic customers are well over the supervisors were informed. It was mentioned and admitted that in the recent situation the German tourist was indeed very rude to Thailand and Thai people and attempted to resist arrest, however, it was a situation for police to handle NOT motorbike drivers.

We will provide more details as we get them.