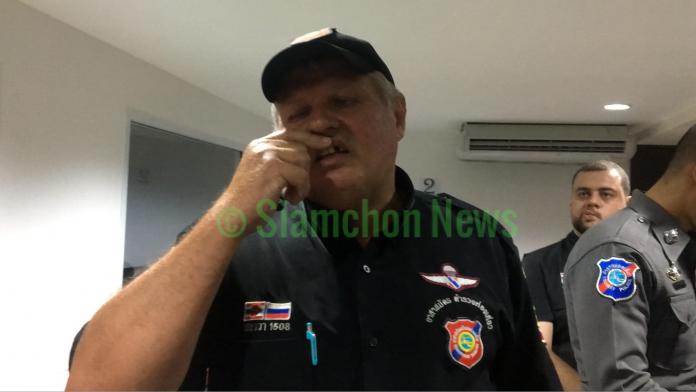 Mr. Mervyn Michael, 58, whose nationality is unclear, was arrested early Friday Morning on Walking Street for assault and theft when he refused to pay a bill at a gogo bar.

Mr. Michael was at a popular gogo on Walking Street and had what was stated to be a small tab of a few hundred baht when he attempted to leave without paying. The gogo’s security staff attempted to make him pay but he became aggressive and angry and they summoned the tourist police. The tourist police brought Mr. Mervyn to the checkpoint but quickly discovered that he was so intoxicated he could barely speak.

The tourist police attempted several times to get Mr. Michael to pay but he refused and attempted to flee. When confronted by a tourist police volunteer from Russia Mr. Vyacheslav Cherepanov he allegedly attacked Mr. Cherepanov knocking out one of his front teeth. Multiple police at the check point then tackled an aggressive and uncooperative Mr. Michael to the ground, handcuffed him and brought him to the police station.

Mr. Michael continues to refuse to cooperate and is said to have no source of funds on his person. He is now facing for a few hundred baht a potential two year sentence in Thai Jail and a substantial fine. He is being held in remand at the Thai jail for trial.

Lesson of the day: Pay your bills, don’t attack the police.