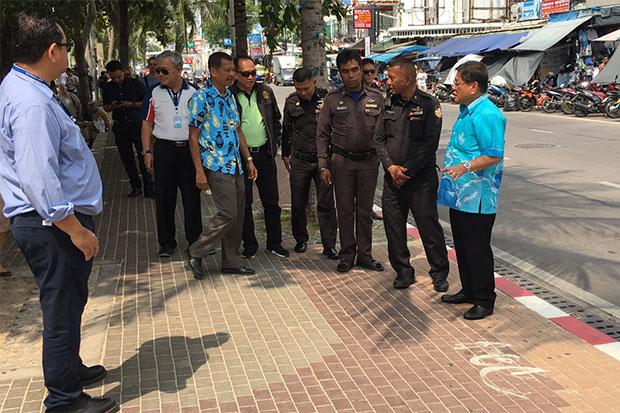 District and City officials have announced that during the popular Wan Lai water festival there will be no individual footpath vending on Beach Road. This does not include pre planned concerts and sponsored booths that have been planned and approved in advance as this year for Wan Lai, the 19th of April, there are expected to be at least fifteen sponsored and approved concert and water splashing zone booths.

Multiple individual vendors have been spray painting in prime locations on Beach Road the word Jong in Thai which means reserved over the past few days. City officials are reviewing cameras and footage to identify who did this and ensure they do not set up private vending tables and booths during the festival.

Vendors who ignore the ban will face a fine of 2000 baht and have their goods seized during the festival officials announced. Although historically selling private goods on the footpaths have always been against the law in Pattaya it has not been enforced. City officials said this year in the interest of, quote, public safety it will be prohibited and strictly enforced during the festival which is expected to draw around 60,000 people both Thai’s and foreigners to Beach Road on the busiest day of the year for the city.

Beach Road will be closed in it’s entirety from 6AM-7PM on the day of the festival officials announced along with half of Central Pattaya Klang.