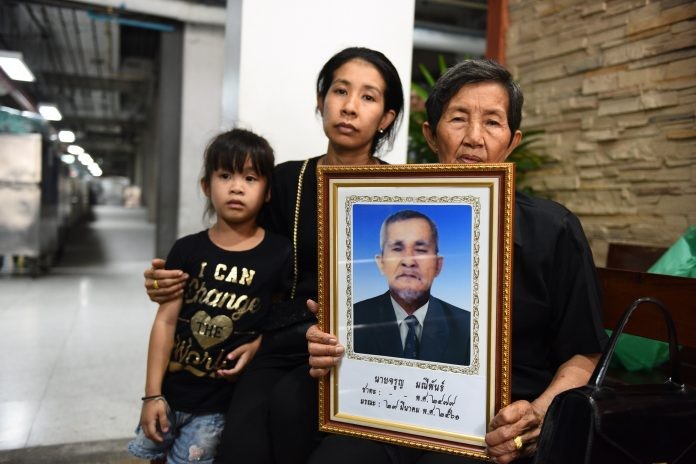 82 year old Juroon Meepan, a waste scavenger for a living, was kicked off of his cart earlier this month in Bangkok after 21 year old Narathorn Soattiyung, who goes by George, clipped his cart with his motorbike, got angry (Even though the accident was his fault) and came back and brutally assaulted Mr. Meepan, which put him into a coma. Narathorn, who was originally accused of assault, was re-arrested and charged with manslaughter this morning, the second and released this afternoon on a 180,000 baht bond.

Social media is understandably very upset at the situation and has blasted Narathorn on multiple Thai websites.

“I want to tell him, don’t worry anymore. You get to rest now,” Juroon’s 71-year-old wife Chaluay Jaritek said this morning. “To young people: Don’t be so hot-headed. Look at what happened here. Please act like good people. Parents want good children.”

Chaluay said she did not get to have any final words with her husband, who had been unresponsive since the assault.

“I just got to tease him a little, saying that he must be so comfortable, having someone feeding him all day,” Chaluay said.

Juroon’s daughter Wanida Maneepan said Friday their “great loss” should be a lesson.

“Personally, I am angry. But on the other hand, my dad was old and it’s better for him to rest finally,” she said. “I want to tell people to not do this to anyone’s family. It’s such a great loss.”

Before falling on hard times and having to collect waste and discarded goods to sell from his saleng, Juroon was one of the founders of a metal fabrication company called Saksit Alloy. He was forced to sell his stake following the Tom Yum Kung financial crisis of 1997.