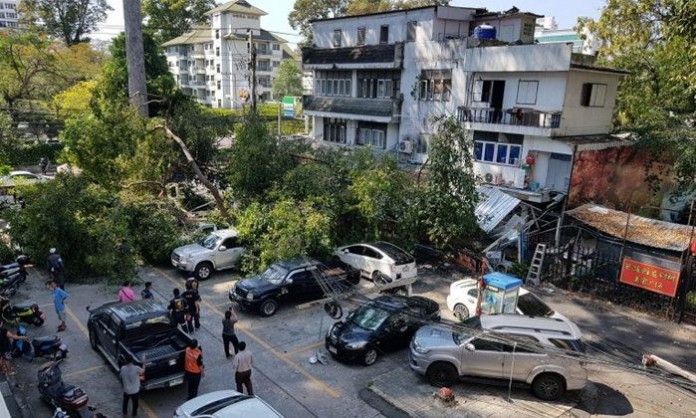 A massive tree came toppling down on Soi 5 in front of the Force apartments on Tuesday, March 20th 2018 in Central Pattaya near 2nd road, disrupting electricity for large portions of the city and damaging over ten police vehicles parked at the time in the area. It also caused damage to area businesses and property.

City rescue officials, police and electrical engineers responded quickly to the scene to remove the tree and assess damage. Luckily, nobody was hurt.

However, a local massage shop owner claimed that Jao Mae Takhian, the legendary Goddess of Trees, appeared to her in a dream the night before and warned her to remove her vehicle for the event would happen. She, who has not been identified, stated that she warned the police and local officials that it would happen but the city officials declined to act on her dream. She was very disappointed with this.

There is also a shrine located right near the tree that fell dedicated to the Goddess. The massage shop owner believes that the amount of police vehicles damaged was because they did not listen to her warning from the Goddess.

Dream Prophecies aside, we are happy nobody was hurt, power was restored and the tree was cleared. It is unclear what caused the tree to fall.